We start this first report of 2017 with hearty congratulations to Megan Giglia for being awarded an MBE for her exploits at the Olympic games at Rio. The Club is very proud of her achievements and it is a nice way to start the year for the Club. 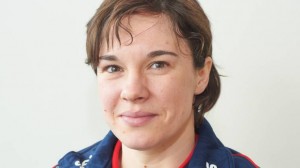 The Club’s traditional start to the year is a walk in the Peak District. This year the walk started in wet cold weather, which was not welcoming, but 14 enjoyed a 6 mile guided walk from Dane Bridge, finishing for lunch in the Ship Inn, where we were joined by 3 others. The guide was Sam Alston, whose local knowledge and ability to read the countryside kept everyone informed. Among numerous facts, we learned about the now ruined Folly Paper Mill on the Dane, and saw what may be the oldest oak in Cheshire, estimated at over 500 years old.  The route somewhat muddy and there were a lot of stiles, which were no problem to Finn the “Lurcher” who could do a standing jump over almost anything. Amelie the Labrador however relied on a lift.  Thanks to Dawn McGovern for organising and Sam Alston for leading the walk. 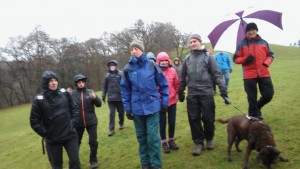 The first Club ride of the year was on Saturday January 7th when, contrary to the weather forecast 11 riders set off in quite dense and very damp fog. Riding through Astbury and up the steep ascent to Mount Pleasant (at a height of 250m), the views were negligible to non-existent. Descending from there, the group had to stop at the Radway Green level crossing to let a train pass; the rain also decided to stop at this point. 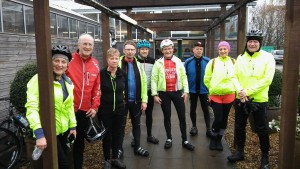 It was clear by the time they arrived at Englesea Brook Chapel car park,  where they had a ten minute break to look at the interesting gravestones and recover from the hill climbing exploits. Then it was off up Snape Lane to Weston, up Slaughter Hill and via Haslington to Astbury Garden Centre for a warm and dry sit down, and a cuppa. A final mile to Unicorn completed the short 30mile route.

Next day on the Sunday run, 8 riders set off to the Lavender Barn Café in warm but slightly dull conditions. It soon turned to a fine drizzle, but spirits remained high. On arrival, they found to their relief that the heating was on, so were able to warm up and dry out some clothes. After a good meal and some massive pieces of cake, they set off home in drier weather. A diversion via Tatton Park gave them a good view of the stags, one which appeared surprisingly tame. The sun was shining as the group returned to Congleton. 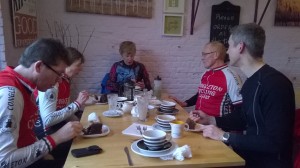 Saturday 14th – Given the heavy early morning rain it was a surprise to see 8 riders on the ride to the Venetian Marina Café, but they only got slightly wet and were not too cold. The roads were wet though, which meant they finished with dirty bikes. Ride was 45 miles on a predominately circular route. 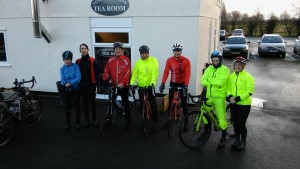