March saw the annual Hilly 33 mile reliability ride with around 1400 meters of climbing which tested the legs of the 14 starters with about a dozen stiff climbs on a route taking in Cloudside, Rushton Spencer, Danebridge, Wincle, Sutton, Macclesfield Forest, Wildboarclough and Bosley Wood Treatment. There were a few punctures and some slight variations of route, but all got round safely. First back were Steve Hulme with guest rider David Bayes in an impressive 2 hours and 11 minutes. The photos shows riders setting off. 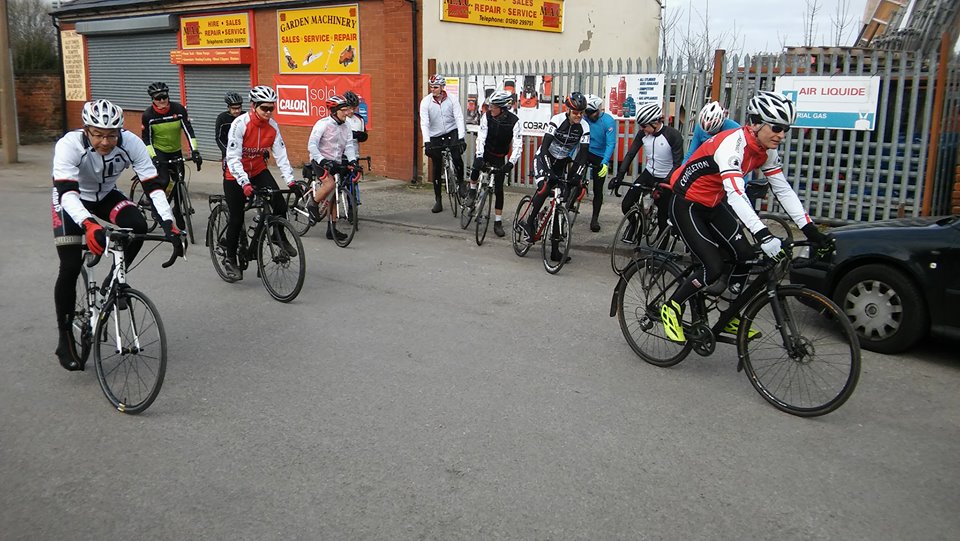 On the same day club members took part in Crewe Clarion Wheelers, Hilly 17 Open Time Trial  Ben Norbury rode well to take 3rd place in the  in 0:37:59. Rob Waghorn continuing his comeback to racing, rode to a 1:04:12. In the 2 up event Wayne Powell and Paul Dentith finished 5th pictured below in 0:44:30. Jamie Willetts, riding for Team JMC was 20th in the solo event with 0:43:35. 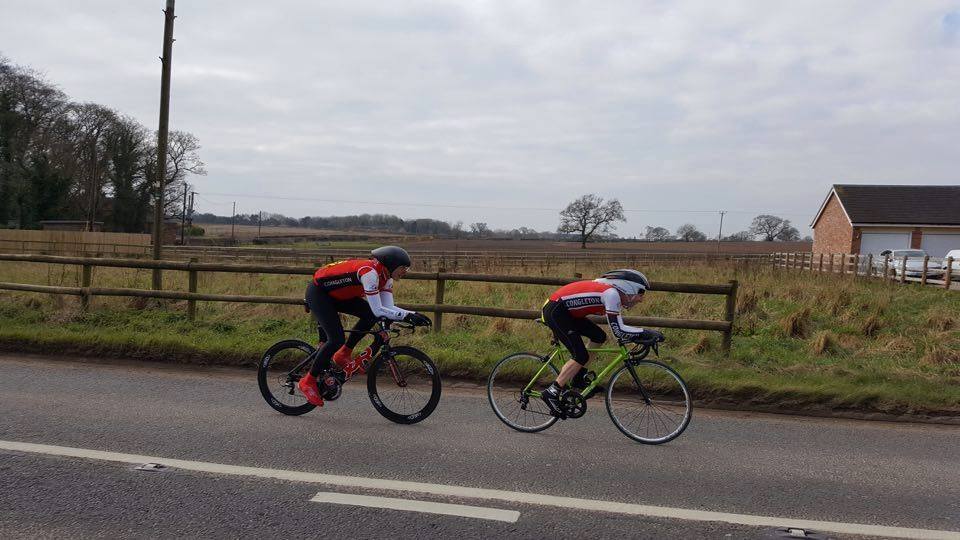 Four club members took part on Good Friday in the Buxton Mountain Time Trial, it is a circuit of 11 miles starting and finishing in Longnor which is completed three times by the Men and twice by the Veterans, Women, Paracyclists and Juniors. There are 390 metres of climbing per lap which, along with the variable weather, makes this one of the hardest time trial events in the country, which attrated national riders, including cycling celebrity Dame Sarah Storey.  Well done to Ben Norbury 1:32:25 Charlie Evans 1:42:41  3 laps, Mike Jones 1:09:24 Rob Waghorn 1:56:06   2 laps.

The five who took part in Easter Sunday’s  club run to Dearnford Lake Nr. Whitchurch, certainly earned their Easter eggs. It was a tough ride in a strong wind, which made it a hard ride to the cafe but a much easier one coming home.  It was a circular route of 72 miles going out via Church Minshull, Wrenbury, Marton and Whitchurch and coming back via Audlem, Weston and Haslington.

The photo shows the group at Dearnford Lake in sunshine,  although they did get wet later on. 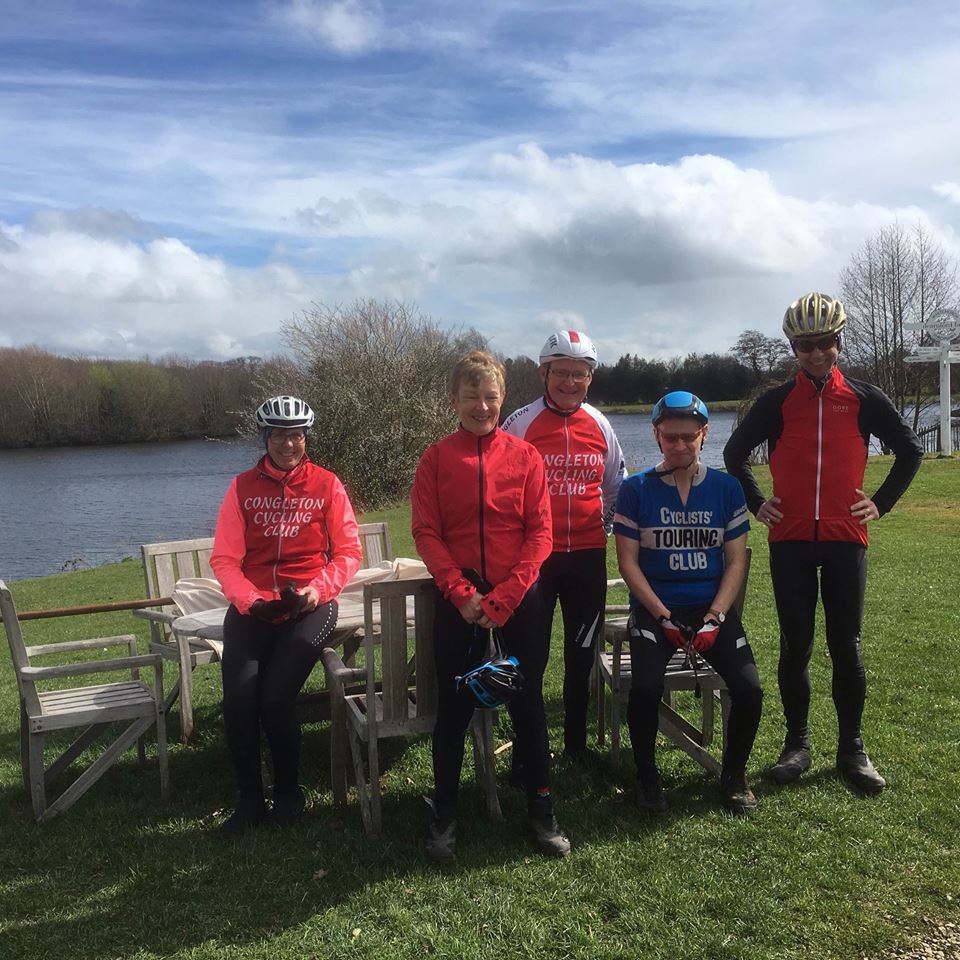 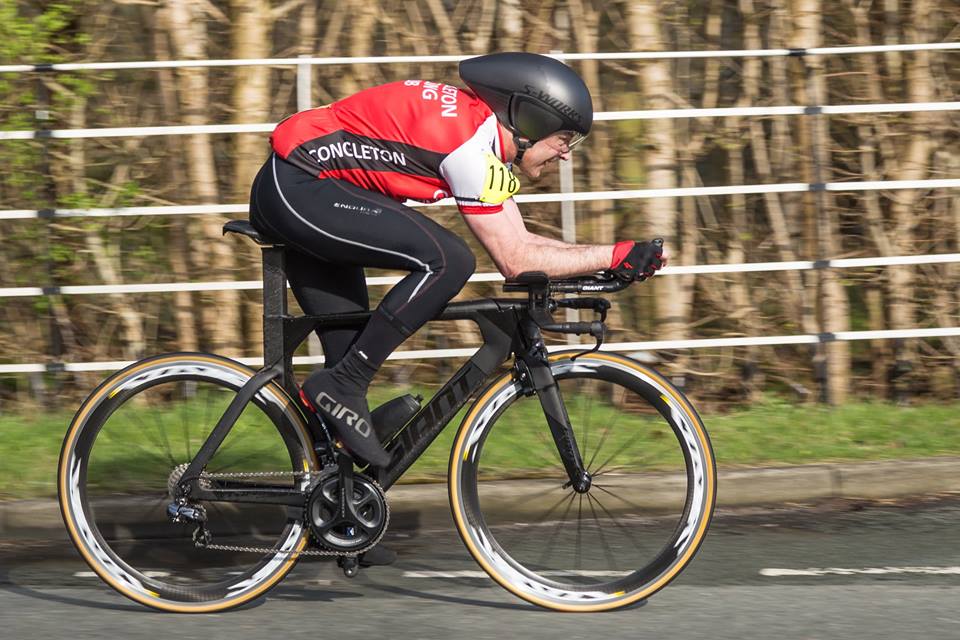