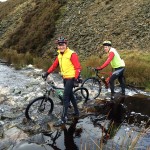 Club Member Roy Hayhurst famous for arranging unusual and great fun rides suggested members get mountain bikes out for a welcome change, and so a day out on Mountain Bikes in the Peak District was born. Starting from Trentabank Car Park, the route was a circuit on tracks through Wildboarclough, Three Shires Head, Gradbach, Danebridge and Wincle. There were 4 stream crossings. The deepest involved wading through 2 feet of water. The “roadies” found it tough going and a planned 27 miles was cut to 19, which still took 4 hours. Thanks to Roy and Lee Wood for organising what was a really good fun ride.

After December deluge we hoped the new year would be better, well it probably has been on balance, but for the weekend of the 16th & 17th January ice and then heavy wind and rain stopped play, a rarity for CCC but normal service soon resumed the following weekend.. 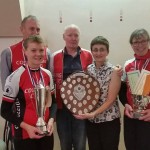 Despite the poor weather face club members arrived at the Manchester and District Time Trial Association annual awards luncheon in Middlewich by bike. Rather damp but in high spirits we joined forces with other Club members to make a boisterous group of 13. The prizewinners list had 21 mentions of CCC riders. After a three course lunch (with seconds if you could fit it in) the prizewinners were awarded with their trophies. (from left) Sue Blake, Wayne Powell Edgar Reynolds Denise Hurst all stepped up to noisy applause. Very well done indeed.

The first reliability ride of 2016 took place in late January, a stunning turnout of 83 riders.
There were a number of possible rides which were accompanied with a route card,  26 miles, 49 miles and differing speed choices. Riders were let off in phases re the volume of riders, with the furthest distance and fastest group first.
The weather was surprisingly warm, lots of muddy faces returned to the Rugby club and smiles told us it had been fun ride with something for all.
The clubs second reliability ride took place early February
The second event was 65miles and again of different speeds, riders were blessed with fabulous but chilly weather and many reported enjoying the ride, some adventurous riders claimed they got a good work out from picking one of the the fast paced groups and pushing on as hard as they could.
The third reliability trial, took place mid February which was a ride of 100 miles.  Thirty five riders took the circular route around south Cheshire and North Shropshire.  The wet forecast thankfully didn’t materialise but the wind certainly did, the route out was into the strong head wind but naturally, and ideally as legs become tired, the tail wind helped all riders return.
Many riders were out for up to 8 hours, deciding they didn’t want that the Tandem pairing of Mark Tilstone and Sue Blake (photographed above in the 65 mile event) made it back in the least time, a great ride well done to them.
It was another successful event in no small part to the volunteers at the Rugby Club base and those providing refreshments en route, a number of riders commented on the quality of the support (and cake!) many thanks to them. 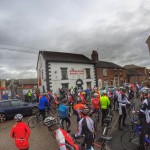 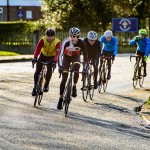 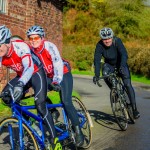 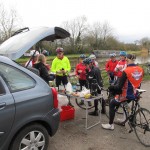 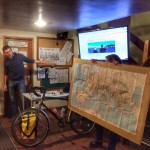 Club members  Steve and Ann Jackson gave us a fabulous evening when they took us through their intriguing stories from their epic from riding back to Congleton from Istanbul.

The stories were both fascinating and captivating, covering the well planned social ride back from Istanbul taking 3 months and covering 3500km. Steve took members through some great stories, interesting facts and some wonderful accounts of the warm hospitality especially the Turkish people