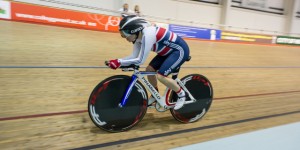 Megan in the World Champs

Club member Megan Giglia competed in the UCI Paracycling World Track Championships last week in Holland. In her first year she just missed out on bronze medals in the C3 500 metre time trial and in the C3 3000 metre pursuit race.
In the 500 m TT she qualified for the bronze medal ride off with a time of 44.736 seconds and just missed the medal by 0.002 seconds in the final.
In the 3000 metres, she qualified for the bronze medal ride off with a personal best time of 4 minutes 24.488 seconds but was disappointed in the final ride with 4:27.918, leaving her fourth again.
Well done Megan. The club congratulates you on a great debut in the Worlds.
The local time trial season is now underway, with several members competing in open events. Paul Dentith has ridden several events in the fixed wheel medium gear league. His 10 mile times of 28:40 (Yorkshire CF event) and 27:17 (Manchester and District event) and 25 mile time of 1:9:30 (Altrincham Ravens event) give him the league lead after 3 events. Paul also rode with gear in the RTTC Series classic TT at Uttoxeter, finishing in 1:4:09 for the challenging 23 mile course. In the Manchester and District 10’s, Wayne Powell clocked 24:47 in the March 21st event and in the March 28th event there were five club riders. Kelvin Milward was best in 25:48 with Duncan Poole 28:11, Sue Blake 30:03, Denise Hurst 30:19 and David Hurst 36:37, the other representatives. The clubs own evening time trial league starts with the hilly 9.5 miles around The Cloud on April 7th.
In road race events Junior Mark Allen has been busy riding closed circuit events in Shrewsbury, Rhyl and Darley Moor. The step up from juvenile last year means that Mark now has to ride over longer distances. 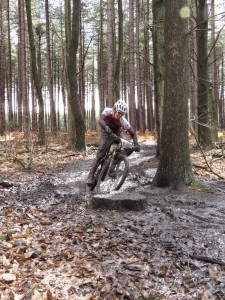 Charlie Evans competed in a very wet British Mountain Bike Series Race 1 at Sherwood Pines .in Nottinghamshire. After starting from the back he rode his way up to finish 55th of 94 starters in the Expert category. 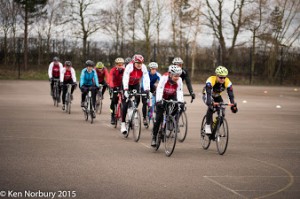 Pete Akers Smith delivered the first two of his Group Riding Skills coached sessions (March 21st and 28th) at Eaton Bank Academy. The participants started with braking and cornering techniques before going on to following wheels and riding side by side in close proximity. Each session was finished off with a short pursuit race, to put the skills to a competitive test. The final session will be at the Rob Holden closed road circuit Tameside, Manchester on Easter Sunday April 5th. Pete says that he hopes to repeat the sessions for other club members as required.
Two special events were hosted at the Rugby Club in March. On the 19th a Race Information Workshop attracted a lot of interest not only from Club members old and new, but potential members as well. A special guest was Les West, twice winner of the Tour of Britain, world championship silver medallist and multi national champion and record holder. Les gave an engaging talk on how he got into road racing. Club Coach Charlie Evans then set everyone off on a ‘getting into bike racing workshop’ by handing out some questionnaires to promote thinking about what motivates us to cycle/ride/compete. Experts were on hand at a series of stations to talk members through cyclocross, MTB, Road, Track and TT disciplines. The bar was open throughout the evening and was also a popular attraction, as were the refreshments prepared by Georgina Norton.
On the 28th of March the theme was First Aid for Cycling, where the club was treated to a presentation by paramedic Steve Evans who has developed a course specifically aimed at cyclists. Steve was very entertaining and his presentation was both informative and practical. The course is available as a free resource at this link. Thanks Steve!
http://issuu.com/carltonreid/docs/firstaidforcyclists
As always there was a lot of riding done in the month, starting with the annual hilly reliability trial, only 33 miles but with about 4500 feet of ascent. In good weather on March 15th – apparently the best we’ve had for the event in years, there was a good turnout of 23 riders, with a large group from the Leek Cyclists’ Club taking part. Thanks to all the volunteers, including Nick Decker for signing us all on, and Stephanie Cooke for the refreshments when we got back to the club house.
On the same day John Jervis took a group of members on a mountain bike trip to Cannock Chase, where they rode the red-graded ‘Follow the Dog’ trail, followed by the blue graded Sherbrook Valley Trail. There will be more such trips.
Jill Jervis has been leading Tuesday night spin sessions at the Leisure Centre. “They have been very popular” said club chairman Bob Norton but they will soon be replaced by the Tuesday evening time trial league.
Bob Banner and Bev Hambleton completed their first Audax ride of the year, riding the 71 km “Ramble through Heather” event from Lichfield on March 29th. Bob said “it was very wet and windy”
The club runs on Saturday (10:00 a.m. from the Unicorn at West Heath) and Sunday (9:30 from the Rugby Club) were well supported. The Saturday rides are to be expanded from two/month to every Saturday from April 1st. Details can be found on the clubs Website www.congletoncyclingclub.org.uk
The club meets socially on Thursday evenings at 8:30 p.m. in the Rugby Club, except for the first Thursday of each month when we meet in the Beartown Tap. All are welcome.