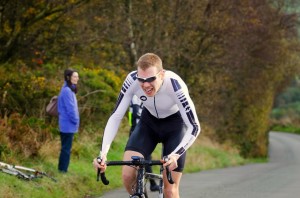 Ben powers up the hill

Not content with becoming the club hill climb champion, Ben Norbury (pictured) rode the hill climb organised by Leek Cycling Club, up the gruelling Gun Hill, which climbs out of Meerbrook.  The climb is one of the area’s most feared climbs and is often used by the Tour of Britain, and a strong headwind made the climb even more challenging.  Ben won the event to cap off a fine season, beating Andy Magnier of Velosure Giordana Pro Cycling by 9 seconds and local rider Rob Howson by 16 seconds.  Congleton rider Mark Allen also rode and finished in 12th place.

The club runs have been well supported during the mild autumn weather with many members enjoying the good company and beautiful countryside around the Congleton area.  Club Runs have visited Audlem, Cotebrook and Wildboarclough recently with the latter ride providing over 4000ft of climbing.  This climbing was rewarded by homemade Ice Cream at the local café, and an easier route back home.  The club runs are weekly social rides which take place on Saturdays and Sundays.  The club organize runs of varying distances and speeds; they are a great way to keep fit and the best way to start cycling, indeed they have been well attended by many new members.