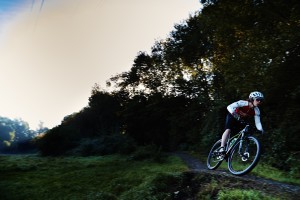 The club recently gained some publicity from an unexpected source. Club coach Charlie Evans featured in British Cycling’s press releases, to announce that they have just passed 100,000 members. Charlie who works for BC, in Coach Education, was photographed in Congleton Cycling Club kit whilst cycling along a single track path on his mountain bike. This photograph (taken by Luke Webber), was then used in the publicity.
Racing
The club’s annual hill climb championship was held on September 28th on the 1 mile Mow Lane (Ganney Bank) course. There were 23 entries on a fine warm day and a slight breeze which was a three quarter headwind for the riders.
The Overall winner was Ben Norbury in 5 minutes 41.6 seconds from Nick Decker 6:28.3 and Tristan Roberts (fastest junior) in 6:43.6. Mike Jones was 4th overall and best veteran in 6:53.6. Ladies Champion is Sue Blake in a time of 8:47.7. Twelve year old Joe France was best juvenile in 10:23.4.
On the same day Mark Allen, the clubs rising junior road race star, competed in a 3 lap race on the perimeter road of the Great Orme, finishing a creditable 22nd.
Mark also competed in his first cyclo cross event on October 5th finishing 11th in the junior race in the Manchester Wheelers North West Cyclo Cross Assocation event at Heaton Park, Manchester. Charlie Evans was 25th in the senior event.
Kelvin Milward set the fastest 50 mile time by a club member in 2014 with a time of 1 hour 54 minutes and 47 seconds in the Manchester Wheelers event on the fast Blyth Bridge – Uttoxeter course in Staffordshire on September 27th.
The last of the 2014 Cheshire Time Trial series events was the Seamons C. C. Event on September 20th where several club members were entered. The event was called off when a car overturned on the A50 south of Knutsford denying the club further points. None the less the club finished 6th in out of 28 qualifying clubs with 959 points. Manchester Wheelers were the winners with 1317 points. Our counting riders were Ben Norbury (8th), Kelvin Milward (22nd) and Edgar Reynolds (32nd). Denise Hurst was 3rd in the ladies competition. Edgar was also 2nd in the 60 – 69 year old age group with Denise third.
In the Johnny Helms 2 Up 25 mile team time trial held on Oct 4th Ben Norbury paced Edgar Reynolds to 25th, place 1hour 4minutes 39seconds. Denise Hurst was paced by Wayne Powell finished with 1.13.34 in 45th place from 50 teams who started.
The national championship 12 hour Time Trial results have now been confirmed. Club rider’s results were Edgar Reynolds 223.91 miles (35th), Wayne Powell 222.57 miles (37th) and Mike Jones 216 miles (43rd). Mikes original mileage was declared as 230.59 (which he believed to be correct) would have placed him 29th.
Club Runs
September 28th. Following the hill climb eleven riders did a 45 mile club run to Dagfields Craft Centre at Hatherton. Having just ridden the hill climb, the race heads were on, and the pace was at times high. The ride, starting from Mow Cop was a flat one intended as a recovery ride for the competitors.
October 4th. This was a wet Saturday ride of 36 miles with refreshments at Jodrell Bank, with only Bob Banner and Stephanie Cooke braving the conditions.
Oct 5th Thirteen riders started out on a lovely morning. The ride was hilly, with over 4000 ft of climbing in just over 40 miles. Sue Blake reported “We enjoyed a very late lunch at Morrison’s café in Leek before making our way home. A very sociable occasion, with much banter.”
Other News
Karen Line took part in the MacMillan Cycletta 80km sportive at Tatton Park on 28th September and the Tour Ride 50 mile sportive on October 5th. Joe Langford also did the 50 mile route of the Friends Life Tour Ride event from Stoke, and Tim Boaler rode the 100 mile option taking in many of the Staffordshire Moorlands climbs. 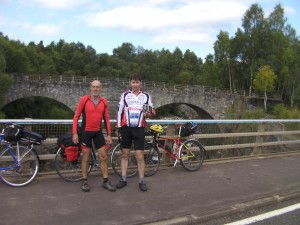 Early in September, two members of the Congleton Cycle Club, Roy Hayhurst and Stephen Kane, along with John Cottrell travelled to Inverness to begin a cycle around the farthest reaches of Scotland.
Unfortunately, the weather in first few days was far from good. Stephen said “As a native, I can only state it could have been a lot worse and the mist only added to the ethereal grandeur, as ghostly peaks waxed and waned into view.”
On the third day they reached the aptly named Cape Wrath, the most North Westerly point of the mainland. At the end of the road was a Stevenson built lighthouse. The road could only be reached by ferry and was last repaired in 1870. Stephen said “I will never again complain about Cheshire East pothole, well until next week anyway”. Congratulations go to Roy as the only person to make it over the rough road, without vehicular assistance. Roy had a mountain bike. The others left their road bikes at a bus stop and caught the bus.
The weather became more benign as they turned east and they even had a strong tailwind for a couple of days. On the last day they passed a French inspired chateau at Golspie and Scotland got a big ‘Yes’ from them as a touring destination.
The Club meets every Thursday at 8.30 p.m. at the Rugby Club, Park Street, except for the first Thursday of the month where the venue is Beartown Tap. New members are always welcome.

The club’s annual dinner and prize presentation will be on Dec 6th at Astbury Golf Club. Tickets are available now.