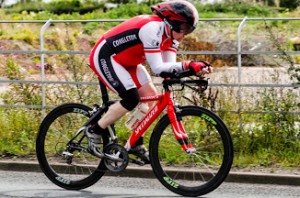 Evening TT’s
The evening of July 22nd was a near perfect one to ride a time trial. Twelve riders got personal best times and several more seasons bests in warm calm conditions on the Chelford course.
The winner was Ben Norbury in 21 minutes and 52 seconds, with Steve Hulme 22:22 second and Mike Stretch (Macclesfield Wheelers) 22:33 third. Third spot for the club competition was taken by Pete Smith 23:12 who just beat Wayne Powell 23:15.
Fastest lady was Denise Hurst in 27:53 from Claire Thompson 28:19.
The best junior time was Mark Allen 24:28 from Will Booth 24:39 (PB) and Joe Langford 25:27 (PB) and Tristan Roberts 27:50 (PB).
The handicap competition was won on this occasion by Roy Hayhurst, in his first event this year, with 25:35 giving a net 18:19, from Nick Wood 25:15 net 18:54 with Will Booth net 19:10. Nick’s ride was his first try on a TT bike, as opposed to a road bike, resulting in a PB by more than a minute.
On July 29th, frequent guest Mark Lovatt continued his winning ways with the fastest time on the night at 21:14 ahead of Steve Hulme on 21:49 who kept scratch league leader Ben Norbury out of maximum points by a single second. Pete Smith (23:14) completed the podium of members in the scratch competition.
In the hard-fought junior league, personal bests by both Tristan Roberts, 25:20 (PB) and Joe Langford 25:25 (PB) could not stop Mark Allen (24:44) from taking maximum points.
In the Ladies competition, Sue Blake (27:51) took maximum points, beating Denise Hurst (28:29) and Claire Thompson (28:43).
August 5th should have been the penultimate of the clubs TT league events, but road works near Eaton caused its cancellation. The final evening TT of the season was on the new Holmes Chapel Road 10 mile course on August 12th. Conditions were dry but windy and the competition intense as always. Ben Norbury confirmed his position as overall league winner with a winning time of 21:59 beating Steve Hulme 22:16 and Pete Tatton 22:59 into second and third places. The second and third places in the overall league ended as Steve Hulme and Wayne Powell. In the final veterans league table, these two finished first and second with Pete Smith third.
Sue Blake was best lady with 27:37 from Denise Hurst 29:13. Leslie Norbury was persuaded by son Ben to have a go and in her first ever 10 mile TT returned a very respectable time of 31:27. The Ladies League winner is Sue Blake from Denise Hurst and Claire Thompson.
In the Junior competition Will Booth used his new bike well to record 24:26 ahead of Mark Allen 25:05, Tristan Roberts 25:12 and Joe Langford 25:15. Marks gained him a win in the junior TT league ride ahead of Joe and Tristan Joe. Will was handicap winner on the night with a net time of 19:47 from Joe 19:50 and Tristan 19:52.
The Handicap league was not decided until this final event. The winner is Angelo de Angelis whose 24:33 was enough to give him top spot ahead of Ben and Joe.

Club Runs
The clubs Saturday and Sunday rides continue to be well supported although there have been some wet rides in the last month. The Saturday rides are twice monthly on the first (30 miles) and third (45 miles) weekends starting at 10:00 from the Unicorn at West Heath, with the Sunday 50 – 60 miles rides every weekend starting 09:30 from the rugby club. Recent Destinations have been Tarvin, Bunbury and Hatherton on Sunday rides, and Knutsford, and Church Minshull on the shorter Saturday rides. 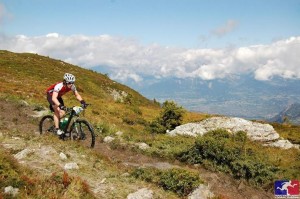 Other Events
Club members have been active in European events recently. Club coach Charlie Evans has been in the Alps wearing club colours in the Grand Raid Cristalp, from Verbier-Grimentz, in Switzerland. This was a 125 km ride off road mountain bike event with over 5000 meters of vertical ascent
In July, Mark Tilstone completed his 15th Etap du Tour, the annual event in which riders can emulate the Tour de France professionals and ride a stage of the Tour. This year the stage was the 18th from Pau to Hautacam in the Pyrenees which was 148 km including climbs of the Col du Tourmalet, 17.1 km long with an average gradient of 7.3% and the fearsome ascent of the Hautacam, covering 13.6km with a gradient of 7.8%. Mark is raising money for Kids Get Going (see www.justgiving.com/MarkTilstoneEtape2014).