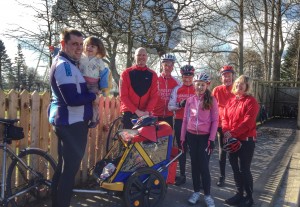 On the Saturday March 1st, a group of eight enjoyed the fine weather on a 30-mile ride to Jodrell Bank for refreshments, via Brereton, Cledford, Middlewich and Goostrey. The Cheshire Hunt made for quite a spectacle near Byley.  One of the participants was Bethan Wright aged 2, albeit riding in a trailer towed by her Dad Ed. Offered the chance to go home from the cafe stop in her mums car she said “no, on bike”. With the sun still shining, the party rode back to Congleton through Lower Withington, and Newsbank and Radnor Bank. The clubs family friendly reputation attracted Elisha Mellor (visitor aged 12) on her first outing with the club and new member Adrian Pennington.  Adrian said “Absolutely super ride today, great fun and a very welcoming inclusive bunch. I couldn’t think of doing anything better today.”

Adrian shot some video on the ride which can be seen on http://youtu.be/7JStCXN6BYE

On Sunday March 2nd the club run went to Lavender House Farm at Dunham Massey on a very windy and overcast day. The route out via Jodrell Bank, Mobberley, Ashley and Bucklow Hill was “easy” enough but the return though Knutsford and Tatton Park was tough because of the wind. It provided a good work out for the 10 participants.

On Sunday 9th March, Stephen Kane was the sole entrant for the Club Run (as other riders were taking part in the 100-mile reliability ride) which was meant to be to Dones Green Café but as he stumbled across  Brookhouse Equestrian Centre (near Comberbach) on his travels and with no one else to please, that became his impromptu destination instead. The staff were very welcoming and would appreciate a horde descending on them on a Sunday, so another possible café for the list. His destination home wasn’t quite as scenic, as he ended up going past the lovely Lion Salt works before he stumbled across more familiar pastures.  As a rhetorical question, if the Saturday runs are know as social rides, are solo Sunday runs, unsocial rides? It was still a very enjoyable day out.

On March 15th the second of this month’s Saturday rides went to Minshulls Garden Centre near Crewe with eleven riders, not counting young Bethan Wright, again towed in a trailer by Dad Ed. We should have got used to wind by now but it always makes for a hard ride. For Helen Jones out for her first ride it was a new Personal Best distance by a long way, showing what can be done with support and a little determination. The Saturday ride is usually around 30 miles from the meeting point but people usually ride from home to the start.

The following day, on the Sunday, ride five riders fought the same wind out to Delamere Station via Goostrey, Lach Denis, and Whitegate. The return to Congleton through Cotebrook, Church Minshull and Brereton  was fast with the tail wind welcomed by all, except Bob Norton who was riding a single speed bike and at times had to pedal at more than 120 rpm to keep up!

25 riders braved the club’s annual 100 mile reliability ride on a loop through South Cheshire and North Shropshire. They enjoyed the best weather for years. The riders set off in two groups an hour apart at 8 a.m. and 9 a.m. There were eighteen riders in the first group and seven in the second “fast” group. Supported by Bob and Georgina Norton providing refreshments en route the first stop was at Eccleshall for tea and cold cross buns. Then followed a further 30 miles to lunch at Prees Heath (Whitchuch), before turning towards home with more tea and buns at Barbridge near Nantwich. All returned to the finish at the Rugby Club between 3 and 4 p.m.

The clubs “chain gang” training sessions have started as the new racing season gets underway. On Saturday March 1st, eight members participated in a chain gang taster session under the guidance of Pete Smith.  This was followed up on the last two Thursday evenings with sessions on the same circuit, based on lanes around Newsbank (in the dark). Other sessions are planned, but riders are advised to check in advance at the moment.

On Thursdays the Bike Maintenance Instruction sessions are proving popular. The last two Thursdays have been on Brakes (instructed by Rob Langford) and Wheels (instructed by Tony Elliott). The next and final session of the six is planned for March 27th starting at 8:30 p.m. in the Rugby Club. This will cover bottom brackets and headsets with Wayne Powell. This Thursday, March 20th there is a club committee meeting at 8:00 p.m. All are welcome to attend.

Charlie Evans opened his 2014 racing season at the 53rd Eddie Soens Memorial cycle on Saturday 1st March. The race took place in calm, sunny conditions at the Aintree race course venue, with 172 riders competing over the 30 laps of the flat 1.6 mile tarmac circuit. The event is a classic season opener on the UK road racing scene, featuring many of the country’s best riders and teams, as well as club riders of a range of abilities, all in the same race. The race has a staggered start, with the lower ability riders being set off 3 minutes ahead of the elite riders, with several other ability groups set off in between. However in the calm conditions the handicap was soon cancelled out, with the majority of the field lapping as one bunch, at an average speed of over 27.5 mph. The high speed negated any  breakaway groups forming, until the latter stages of the race where three riders broke clear to make up the podium places with a 10 second lead, with Ian Wilkinson (Team Raleigh) taking the win ahead of Graham Briggs (Rapha Condor JLT) and Rob Partridge (Velosure – Giordana).  Charlie finished safely with the main field, rolling in with the bunch after avoiding a serious crash in the finale. The 49 mile race was completed in 1 hour and 40 minutes.

The Cheshire time trial season has started. The club has had riders in both the Manchester and District Time Trail Association events so far this month.  Both have been on difficult windy days.

March 9th saw a number of Congleton CC riders enter the annual Jodrell Bank sportive, which is an 80-mile loop around the Cheshire lanes, blessed this year with fantastic weather. The next major sportive is the Cheshire Cat on Sunday 23rd March, which sees 3,000 riders taking part over varying distances up to 100-miles.