Weeks of 3rd to 20th August

Saturday club run went to Radway Green in lovely sunshine. Although there had been some showers we missed them. We went out via Brereton Heath, Cledford Bridge, Winterley and Oakhanger; returning through Hassell Green and Smallwood. There were 12 out: Georgina Norton, Bob Banner, Stephanie Cooke, Bev Hambleton, Wayne Powell, Paul and Amanda Turner, Paul and Alistair Kennington, Peter Nelson, Harry Akers-Smith and Marcus Rohrmann.

Fine weather and the approaching end of TT season brought a club record entry of 50 riders in this weeks 10 on the JC5 course on the Macclesfield/Congleton Road. There was also a record entry of 34 from of our own club members. Times were fast with many seasons’ bests and personal bests recorded on a near perfect still and warm evening. The fastest rider was Jack Green of VC St Raphael with 20:48. The top three Congleton riders were Pete Smith (22:39) Ben Norbury (22:44) and Pete Tatton (22:57).

One of the visitors was Colin Lynch (Macclesfield Wheelers) who recorded 22:59. Colin is a Paralympian and a reigning World Paracycling Champion in the Time Trial. He used our event as final training before heading to Canada, where he defends his title later this month.

Fastest of six juniors was Tristan Roberts in 27:16 with fastest lady Christine Higgs (Macclesfield Wheelers), 25:14, beating our own Sue Blake 29:25. 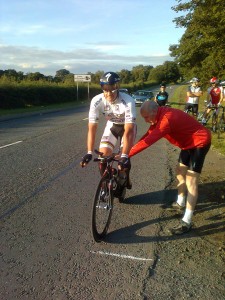 On a pleasant afternoon, three Members rode this event which had been postponed due to bad weather in March. Pete Smith and Wayne Powell each recorded P.B.’s with 58:53 and 1:03:02 and Peter Hayhurst improved his 2013 time to 1:16:46. The winner was Simon Bridge (Manchester Wheelers) with 52:44.

Charlie Evans competed in the final round of the Midlands XC MTB series at Eastridge Forest, near Shrewsbury and finished 2nd to Nigel Martin (Leisure Lakes) over the 5 laps of the steep woodland course, in 1 hour 27 minutes. Podium photo attached. 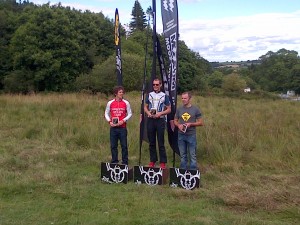 Charlie Evans on the podium.

Number of riders 15 forming two groups. Stephen Kane led the A group and Denise Hurst led the B group. People in the A group were Stephen Kane, Mike Line, Sam French ( who had to contact his father at Cotebrook to take him home as he had a mechanical problem with his bike), Charlie Alston, Andy Farr (who only rode part of the way and then returned home), Sue Collins and Tristan Roberts. They arrived at the cafe half an hour after the B group. People in the B group were Denise and David Hurst, Jim Cook, Bill Boynton, John Broadbent, Sue Blake, Rowland Bainbridge, Peter Smith.

Denise Hurst took her group via Goostrey, Lach dennis, Davenham, Whitegate, Oulton Park into Cotebrook Shire Horse Sanctuary. Lovely weather and lots of chatter. They had a long lunch break at Cotebrook. Peter Smith’s wife Susie met us at Cotebrook with their sons and a friend of the boys. Due to the fact that they had to wait for Sam’s father to pick him up and due to the fact that the A group had fewer people on the way home we all came back together apart from Sue Collins, Bill Boynton and John broadbent who needed to get back earlier. On the return journey they passed by Oulton Park and then made their way to Warmingham, Church Minshull, Middlewich, Brereton and then back to Congleton.

The last club evening TT on the JC26 circuit course was run in bright but windy conditions. The 10 miles was covered in 23:47 by Nick Decker, for his first win of the season. He was ahead of Pete Tatton 24:32 and Ben Norbury 24:34. Best Junior was once again Tristan Roberts with 28:32 whilst Amanda Turner in her first ever time trial was Best Lady in 32:23. There were 25 club members and 10 visitors competing.

With only the hill climb on Sept 29th and this Saturday’s Open 50, left as counting events in the Bob Job Points competition, Pete Tatton now has a 10 point lead over Pete Smith, with long-time leader Wayne Powell in third place. Best Junior is Mark Allen and best Lady is Sue Blake. 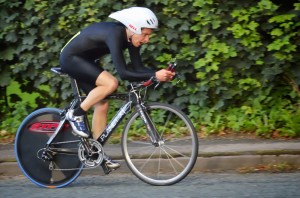 Of the 77 Entries, thirteen Members entered and eleven rode this event in very windy conditions, plus rain for the last hour. Our top 3 riders, Pete Smith with 2:05:23, Nick Decker, 2:07:20 and Kelvin Milward, 2:08:36 also won Fastest Team Prize, beating Leigh Premier by 1 minute 1 second. The fastest rider was Charlie Taylor (South Pennine CC) with 1:49:51, followed closely by Simon Bridge (Manchester Wheelers) with 1:50:07. The event was organised by Peter Hayhurst, who was very grateful for the assistance of 17 Members and 7 Guests. Ken Norbury’s photos are visible on our website – via Photos 2013.

Final round of the British MTB Series, Hadleigh Farm, Essex

Charlie Evans competed on the 2012 Olympic MTB CX track at Hadleigh Farm, Essex. This was the final round of the British MTB Series. He finished the 6 lap Masters Category race, over the very physically and technically challenging course in 9th place in a time of 1 hr 40 minutes, which was won by Scotland-based rider Paul Newnham.

Denise Hurst lead the group through Goostrey, Allostock, Lach Dennis, Pickmere, Dones Green and then to Acton Bridge. They enjoyed lunch at a garden centre just by the River Weaver and  returned through Great Budworth, via Pickmere and Plumley, then towards the Whipping Stocks at Peover, Bate Mill, Lower Withington and down Giantswood Lane back into Congleton where they all went different ways home. The weather was great in the afternoon with a following wind however they had encountered some rain in the morning.

To celebrate the end of our Tuesday Evening TT season, 36 Members / Family / Friends gathered at the Rising Sun (our usual meeting / parking place for TT’s). We all enjoyed the good food and refreshing drinks and the usual cameraderie – which was enhanced by getting to know newer Members who usually fly by with a quick “Hello”. Our Chairman, Bob Norton, shouted a brief summary of our TT season (including our Open 50-mile TT from the previous weekend) which had been a record year in many ways: 600 rides from a total of 47 Members, plus 70 Non-Members, supported by 15 Helpers (Members and Guests) from a total Membership which has now grown rapidly to over 100.

For Clubruns (Saturday / Sunday, A/B), Club Time Trials and Reliability Rides– see website. The final events of the year are the Hill Climb on Ganney Bank, the postponed Hilly Reliability and 100-mile Reliabilty Rides and the Horseshoe / Viaduct AUDAX events.