Rob Waghorn reports: “We crossed over the hills to Lake Vyrnwy via Montford Bridge, Minsterley, Montgomery and Dolanog. We then went over Bwlch y Groes to the side of Lake Bala before returning back to Wem via Llangedwyn, West Felton, Wykey, Marton and Loppington. The course included over 3,000 metres of climbing and luckily the weather was dry but still quite cool overall.”

Rob Waghorn organises these events on an annual basis. The 3 Audax events were run with a total of 14 starters in each of The Hills & Plains (210K) and Just The Hills (110K), and a further 19 starters in Just The Plains (117K). The day was dry and quite warm with all the riders safely completing the courses and all enjoying their rides.

Resisting the allure of the CCC Hills & Plains Audax events, three members set off on the scheduled Club Run to Longnor to ‘enjoy’ some hilly terrain. Veterans David McVitie and Bill Boynton were prompted to greater efforts as young Mike Line made the inclines seem easy (another youthful dancer on the pedals!). Out to Longnor with a slight tailwind in places took only 1h 30m despite the lumpy route via Park Lane, up Blacky Bank and over Bridestones to Rushton, across the A523 and over Gun Hill to Meerbrook. Then across the A53 to Thorncliffe where the lesser of two evils is to turn R then L for the steep 20% ascent to Morridge. Wonderful sunny vistas of Jodrell Bank, Cheshire Plain and surrounding hills repaid the climb. Going north to the Mermaid then right towards Warslow we encountered a large Land Rover convoy which also turned towards Longnor where we enjoyed a long downhill section at 35 mph showing them all that pedal power can beat 4WD. Uphill to Longnor, we celebrated with a coffee break in the craft centre. Re-invigorated by cappuccino and bravado, we created a more challenging return route. Firstly, down to Crowdecote with views across the Manifold valley, then up the winding eastern slope with its 20% kick on a LH bend. Then left to Earl Sterndale, then up a long quiet lane that rises inexorably past Buxton Speedway at High Edge, to Dalehead on the A53. A strong headwind on the descent into Buxton was refreshing after the hard slog and soon we passed the Opera House and swung left up the aptly named Long Hill. After 3 miles a lane took us left on a steep descent to the Goyt Valley dam where the left turn took us past many walkers and picnickers on the steady rise from the narrow wooded Goyt to the open moor of the Cat & Fiddle. Bill took the view that too many bikers of the other variety were using the famous A537, so the trio plunged down to the Stanley Arms, up to Standing Stones, and then negotiated the descent through Macc Forest to Langley and Sutton. From Fools Nook on the A523 and the A54 a good tempo was maintained to reach the clubhouse after 51 miles and nearly 6,000 feet of climbing. Enough for the veterans but young Lines took off to Rudyard from Bosley to add another climb or two. The route can be viewed publicly – see http://www.bikeroutetoaster.com/Course.aspx?course=555275.

OR (shorter version if you prefer)

Resisting the allure of the CCC Hills & Plains Audax events, veterans David McVitie and Bill Boynton and young Mike Line set off on the scheduled Club Run to Longnor. Out to Longnor with a slight tailwind in places took only 1h 30m despite the lumpy route via Rushton, Gun Hill, Meerbrook, Thorncliffe and Morridge. Wonderful sunny vistas of Jodrell Bank, Cheshire Plain and surrounding hills repaid the climb. At Longnor, we celebrated with a coffee break in the craft centre. The trio followed more challenging return route via Crowdecote, Earl Sterndale and Dalehead to the A53 followed by descent to Buxton Opera House, left up Long Hill and after 3 miles a descent to the Goyt Valley dam. After the steady rise from the narrow wooded Goyt to the open moor of the Cat & Fiddle, they returned through Macc Forest to Langley, Sutton, and Bosley to reach the clubhouse after 51 miles and nearly 6,000 feet of climbing. 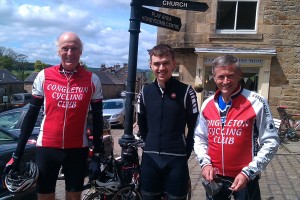 Sue Blake took part in the Nantwich Triathlon. Georgina Norton and Pete Nelson rode over to give her a cheer. As you can see from her e-mail she did extremely well: “Thanks to you both for coming out to see me today. I’m feeling pleased with my efforts now I’ve got the results. 25th lady overall out of 182 and 3rd in my age group out of 13. Happy with that! I have an open water tri next Sunday at Marbury Park so looking forward to that now. My official time was 1h 24:27.” 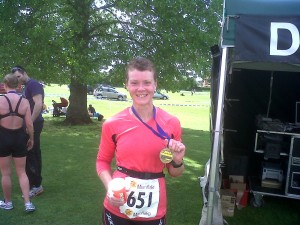 Charlie Evans reports: “I went out to Bormio, in the Italian Alps and did the Gran Fondo Santini, on 2nd June, which took on the climbs of the Mortirolo and the Stelvio. Riding the 150 km route, I climbed to an altitude of 1800 m over the steep Mortirolo Pass and 2700m on the 20km long Stelvio Pass, which both feature regularly in the Tour of Italy. Conditions were spring like at lower altitude, but walls of snow escorted us to the finish over the final kilometres of the Stelvio. Ride time was 6hrs 45 minutes, with the final 20 km ascent taking approximately 1 hr 40 mins. Around 1000 riders participated in the event, which was sponsored generously by Santini Cycling Clothing. Event organisation was impeccable, with fantastic support from the Police and volunteers, especially regarding road closures and providing cyclists in the event with right of way over traffic.

CTC Tour – Atlantic to the Med (Bordeaux to Montpellier) – 8 days

Sheldon Starkey reports: “I went with Bob Norton (CTC Leader and CCC Club Chairman). On one dark winter’s evening, I got chatting to Bob at a Congleton Cycling Club do about touring and he briefly mentioned that he was running a tour from the Atlantic to the Med in May so after not much thought, I jumped at the chance and signed up.  Fast forward some months later and section in the itinerary regarding weather stated ‘That the weather should feel like a good British summer’.  How right he was I must add!

May the 24th dawns wet and cold as I meet Bob and Frank (mate of Bobs and assistant leader) at 8:15am in a greasy spoon cafe just off junction 28 of the M1.  Travelling on the bike bus is much like the pain and suffering us cyclists sometimes endure.  Pain for your derrière (sitting down for such long time) and the suffering you go through for the hours travelled.   But at least Jason’s (Courier on the Bike Bus) Car-ban-ara, wine and such like keep you fed throughout the journey. After too many pick-ups to list, a ferry crossing and a drive we arrive in dull, damp Bordeaux for a ride over to Archacon.  The group consists of an eclectic mix of 16 riders from ages ranging from 43 to 76 (including one Australian and two Kiwis) thus resulting in a bit-of-faff getting the  bikes sorted and riders fed at some hotel.  But at least my rear was happy to be off the bike bus and on something much more comfortable.

The weather was pretty good for the first few days as we rode from the Dune du Pylat through beautiful pine forests on cycle paths that put our British roads we love to shame.  Day 5 from Saint Jory through to Day 7 to La Salvetat the weather deteriorated to dire conditions that us British are so used too. 7 degrees and the winter kit came out and the sunscreen stayed firmly in the bottom of my panniers. Bob was right about it being a good British summer.  Hey ho…a bad day’s cycling beats a good day in the office! Day 8 from Lamalou Les Bains to Aniane and Day 9 from Aniane to Montpellier, the weather gods were on our side and the sun shone as we chipped along through beautiful French villages and near perfect roads. Razor sharp tan lines are now back in for 6 months I thought as the sun cream finally came out.

My Garmin registered some 457 miles covered since leaving Bordeaux and as the Bike Bus picked us up from Montpellier for the return journey back home, I can easily say the trip was truly immense, great company, great bunch of riders, great food, great country, great leader but not so great weather.  I will definitely be booking another CTC tour soon!” 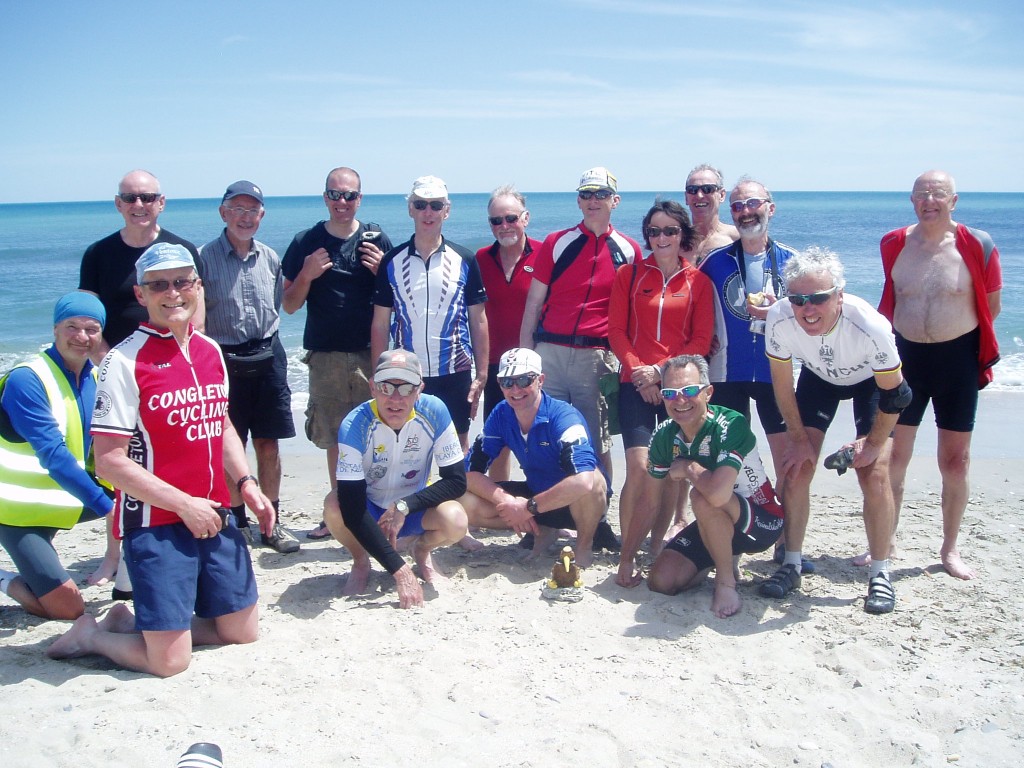 Reminder – Next Social Ride is on Saturday, 15th June