23 Club members took part recently in a 2 hour session at the Manchester Velodrome. Charlie Evans was our chief coach for the evening and Denise Hurst acted as assistant coach. The riders were split into 2 fairly equal groups. The novice riders were taken through the basics of bike positioning, starting and stopping (easier said than done on a fixed-wheel bike!), and safely riding on the banking. By the end of the session all were riding confidently on the blue line. The more experienced riders concentrated on improving their group riding and bike handling skills. Some speed exercises were also given that proved more strenuous but still much enjoyed. All riders thoroughly the evening, with many asking the organiser Tony Elliott when the next one would be! 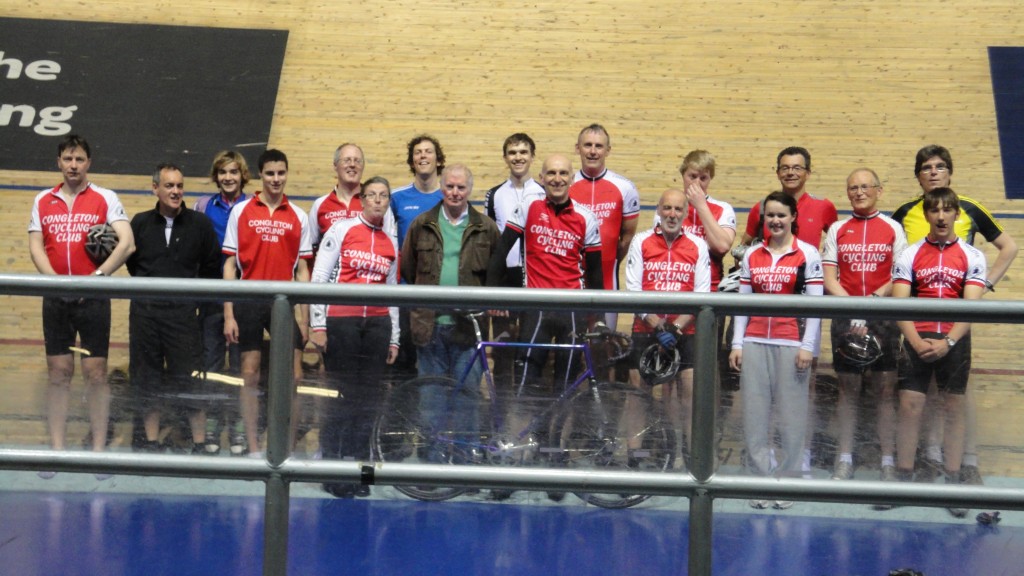 Bob Norton reports: “The weather forecast for Saturday was strong winds and heavy downpours. Starting in Abergele on the North Wales coast, four riders set off in light rain heading for lunch in Betws-y-Coed. They were Georgina and Bob Norton, Joe Langford and Richard Cowan. Turning right at Llanfair Talhaiarn and heading up the Elwy valley it was still raining but the wind was only a light headwind, so good progress was made through Llangernyw to the head of the valley where we turned off the main road and headed down into the Conwy Valley, before climbing back up to Nebo. By now the rain had stopped. From Nebo, more lanes took us down onto the A5 and into Betws in another rather heavy burst of rain. We were a bit wet when we got to the railway station café (in a railway carriage), for beans on toast. Fortunately that was the last wetting of the day. After lunch we went onward down the Conwy Valley through Dolgarrog to Conwy and then onward to Llandudno into a very strong headwind. It was difficult to keep from being blown around, so we decided against going around the Orme, settling for coffee and cake instead. From Llandudno, the way back to Abergele was through Rhos-on-Sea and along the North Wales Coastal Path, with a howling tailwind. The ride was 60 miles with about 4000 ft of climbing.”

Stephen Kane and Paul Kennington report: “An additional Club run was run on Sunday that went to Alton (of Tower fame). Three Steves – Kirkham, Smith and Kane and Paul Kennington rode out with the promise that there was only one main hill and after that it would be rolling. Unfortunately for all, it had more ups and downs than the neigbouring roller coasters and after a very tiring 1000m of climbing we made it to the Ramblers’ Retreat for a welcome café break. The return leg started with a Strava segment called ‘Huntley Dirt Track’ – probably more suited to cyclocross – described as ‘a rough dirt track which is ONLY passable by 4WD vehicles’. The heavens opened and with the sat nav promising even more lactic burn, the group decided to adopt a more direct route home missing the joys of Brown Edge and Biddulph Moor. The total ride was 55 miles in length.”

Charlie Evans reports: “On Sunday, James Bailey and I went over to North Wales for the Brenig Road Race, promoted by Rhos-on-Sea CC. This was a 65 mile road race, consisting of a hilly 37 mile loop up from Denbigh to Brenig Reservoir, down to Cerrig-y-drudion and across to Ruthin, before returning to Denbigh for 3 laps of a shorter finishing loop. The selection was made on the road to Ruthin, with both James and me pulling hard to make it into the front group. James, in his first season of road racing and his first race on the open road stayed with the group until the last lap, and I finished in the main field. 80 riders started there was a high rate of attrition. I finished at the back of the bunch in 32nd place, with pace of the lead group pulling back a race long break in the finish. James Bailey finished in a chasing group in 48th place in his first open-circuit road race, claiming the award for 3rd place 4th cat rider. The 65 miles were covered in 2hrs 46 mins. The winner was Lee Baldwin of Buxton C.C.”

Rob Waghorn reports:  “Last Sunday I rode the New Forest Excursion 200K which criss-crossed  the New Forest from Lymington. It was a very scenic ride through many New Forest tourist towns with lots of animals wandering around freely. Unfortunately the weather could have been kinder, a stiff wind was present all day and at times it made life very challenging while riding directly into it for over 2 miles across open moorland. Also in the afternoon the skies opened and some showers did their best to dampen all the riders’ feelings. However, despite the weather it was a good day out and I met up with some Audax friends too.

On a wet and cold evening, 27 riders competed in the club’s 10 mile TT on the Macclesfield road. There were 19 Congleton CC members and 8 visitors, including 5 from Leek CC who were using the event as their club 10 mile championship. The fastest rider was our own Pete Smith in 23.21.