The day was bright and reasonably warm. This may explain the huge turnout for the monthly Social Ride. There were 20 riders waiting to start from the Unicorn at West heath, to go on a 32 mile ride with a stop at Jodrell Bank. The participants were Bob and Georgina Norton, David McVitie, Joseph Langford, Oliver Davenport, Mark Allen, Rob and Avril Waghorn, Bill Boynton, Les Lancaster, Jim Cook, Rowland Bainbridge, Peter Nelson, Paul and Alistair Kennington, Bob Banner, Heather Joseph and Rosie Pearce and Stephanie Cooke. Ages ranged from 12 to 80 years old. For safety, the group was split into two with the instruction to keep a 200 yard gap between them to help passing traffic. The route followed was via Brereton Heath, Cledford, Middlewich (back streets) and then on down Croxton Lane, and through Byley and Goostrey before a refreshment stop at Jodrell ban Visitor Centre where itb was possible to sit outside in the sunshine. (Photo). Returning to West Heath, the group followed lanes through Lower Withington and Newsbank, with a climb of Radnor Bank as the sting in the tail. 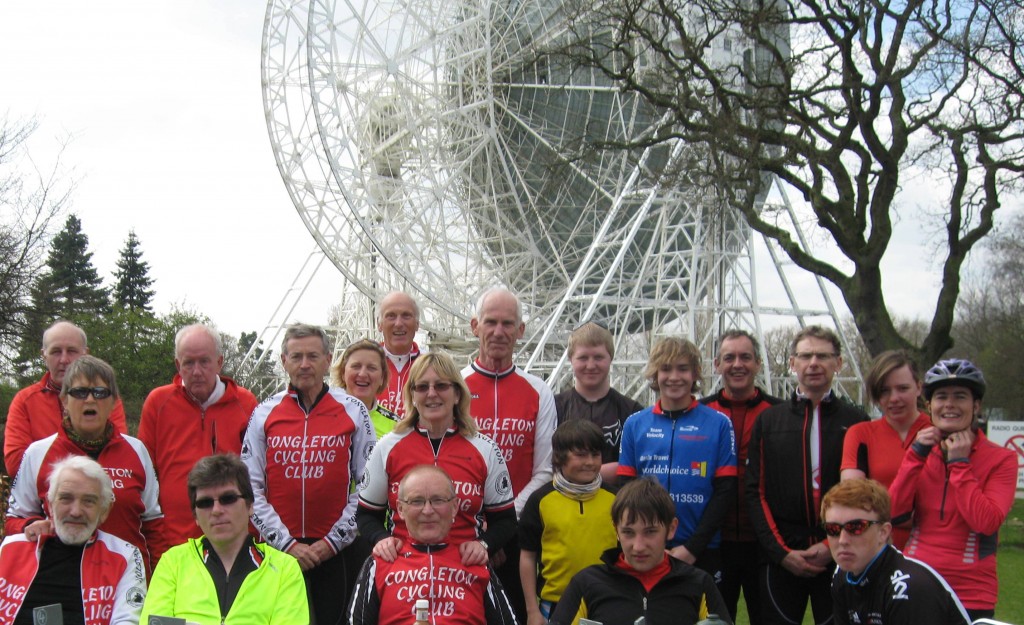 AUDAX 310K, The Plains, from Poynton to Newport and back

Rob Waghorn reports: “The start was at 23:00 on Saturday in Poynton and the weather was quite cold during the night and through to Sunday lunchtime when showers of rain started and carried on to the finish late afternoon. With a slight navigational error I did 314K and was pleased with it as an event.

The outward ride was through Wem, Ford and Montgomery to Newtown. The route was the same both ways from just above Wem but on the return back through Prees and the lanes past Crewe, skirting Congleton via Radnor Bank and across to Birtles Lane near Monks Heath before joining the original route at Mottram and back to Poynton. I got back at 16:25, with no doze stops, well within time limit by over 3 hours. There were 5 stops. On the way down: Whitchurch, Dinky’s Dinner near Ford and Newtown before returning to Dinky’s, Radway Green Garden Centre Café and the finish. There were approx 40 riders and I had some company most of the time.”

The runs list destination for the day was Tittesworth Reservoir Visitor Centre, a short but hilly ride. This time there were 8 riders who left the Rugby Club and headed up through Buglawton. These were Sue Blake, Pete Smith, Steve Kirkham, Sam French, Stephen Kane, John Broadbent, Jim Cook and Bob Norton, these last two out for a second day of the weekend. We were all hoping that Pete’s legs might still be recovering from his PB ride of 1:01:06 in Saturdays M&DTTA 25 Championships, but no such luck! Guided by Bob Norton the route took the group to Sutton by way of Fools Nook, to start the more serious climbing up to Cluelow Cross. Bobs bike suffered an inconvenient failure in Sutton. The rear gear cable snapped, forcing him down to just three gears on the front changer, and ensured a hard ride. Continuing through Algreave to Gradbach and then turning up towards Royal Cottage, before turning again to go over Hulme End and down past the Roaches to Tittesworth. Here we met Bill Boynton who had ridden out to meet us. The Peak district scenery was magnificent, as ever.

Suitably refreshed, the vote was to go over Gunn Hill. It used to be on a local road race circuit, around which it is said that Potteries legend Les West never lost a race. Most recently it was on the route of the 2012 Tour of Britain race. From the top a swift descent brought us down to Rushton Spencer, to be faced with a final climb up the Bridestones and back around Cloud End, to finish with a mere 34 miles, but having climbed over 3500 feet. 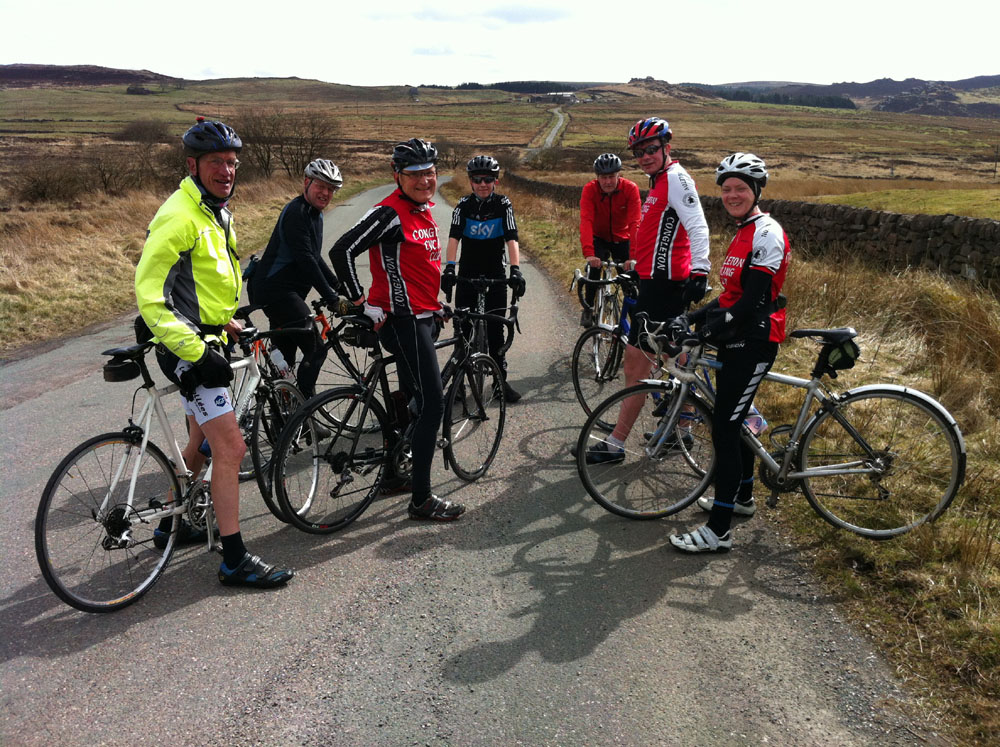 Roy Hayhurst, Quiz Master, was complimented by the 20 Members and Guests, on his hard work and excellent visual (Powerpoint) presentation of a wide variety of questions on Cycling and Non-Cycling topics, plus the presentation of the answers, which included impressive video clips. Isn’t it amazing what can be achieved via the Internet!? Georgina and Bob Norton were also thanked for their home-made and very tasty refreshments and Peter Hayhurst was pleased that much of his old (but useful) cycling accessories were given a new home.