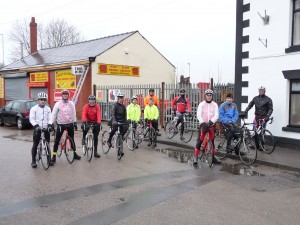 Riders at Start of 65-mile Reliability

The club’s 65 mile pre-season reliability trial took place with Riders opting for either 12.5 miles an hour or 15 mph average speed. The morning was cold and wet. None-the-less 12 riders signed on, 9 club members and 4 visitors. The route took the riders out through Church Minshull, past Oulton Park and on through Utkinton to turn North at Tarvin. There, a cold head wind met the riders for the slightly longer return journey through Delamere Forest, Acton Bridge, Great Budworth and Knutsford. All starters returned within the specified time although a variety of route deviations were followed by many on the return journey. The rain never stopped all day and many were victims of punctures in the poor conditions. Club members taking part were Wayne Powell, Stephen Jackson, Mark Tilstone, Andy Malbon, Paul Kennington, Mike Jones, Sue Blake and Georgina and Bob Norton. 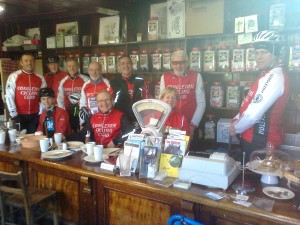 What a great weekend for riding, still on the cool side but at least dry and bright. The weekend of Feb 16/17 saw two club runs in bright sunshine, in stark contrast to recent weekends. There was a good turnout for both rides with nine riders on Saturday and ten on Sunday, with four even doing both days.

On Saturday the monthly “Social Ride” went to Goostrey Home and Garden for a refreshment stop. We welcomed two riders new to our club rides, Amanda Turner, a new teenage member and Mark Allen also came out for the first time. The others were “old hands”. Georgina Norton led the group by way of Brereton Heath, Brereton Green, Cledford and Middlewich to the cafe stop, and then back via Goostrey, Jodrell Bank, Lower Withington and Newsbank for a ride of 29 miles. Other riders were Bob Norton, Paul and Alistair Kennington, Les Lancaster, Paul Turner and Bill Boynton.

On Sunday we had a club run again after two weekends of Reliability Trials. Another new teenage rider, Sam French, joined us for this ride to the Priest House café in Audlem. This is a favorite destination with the club although was our first visit in 2013. The riders were Bob and Georgina Norton, Ed Wright, Petes Smith and Nelson, Jim Cooke, Bill Boynton, Dave Hurst, Paul Kennington, and Sam French. We headed out of town on the Newcastle Road and then via Rode Heath, and Alsager to Audley. Here Paul’s chain broke which required a swift bit of chain riveting before proceeding over Shraley Bank to Betley, then through Wrinehill, Bridgemere and Hankelow to Audlem, where we filled the front half of the cafe. The return route was though Wrenbury, Hough, Weston and Barthomley, Alsager, Malkins Bank and Smallwood for a round trip of 50 miles.

I would like to include a quote from one first timer with the club this weekend. “Just emailing to say what a fantastic day I had today – can’t feel my legs now! It was a privilege to cycle with such nice, welcoming people and I look forward to the next ride” Great feedback! 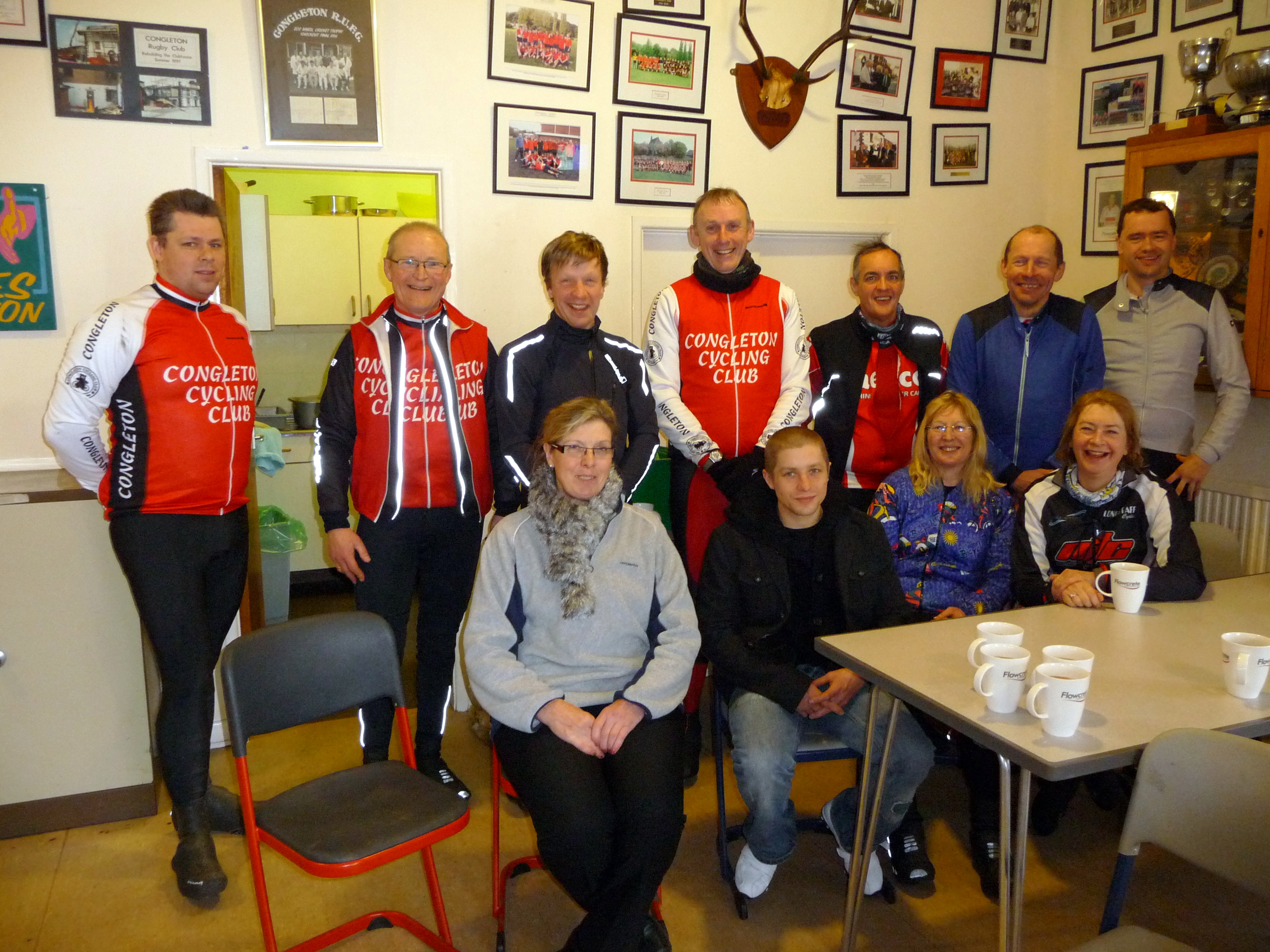 (Empty chair: waiting for Sue Blake who had gone AWOL on 0,6-mile ride!) 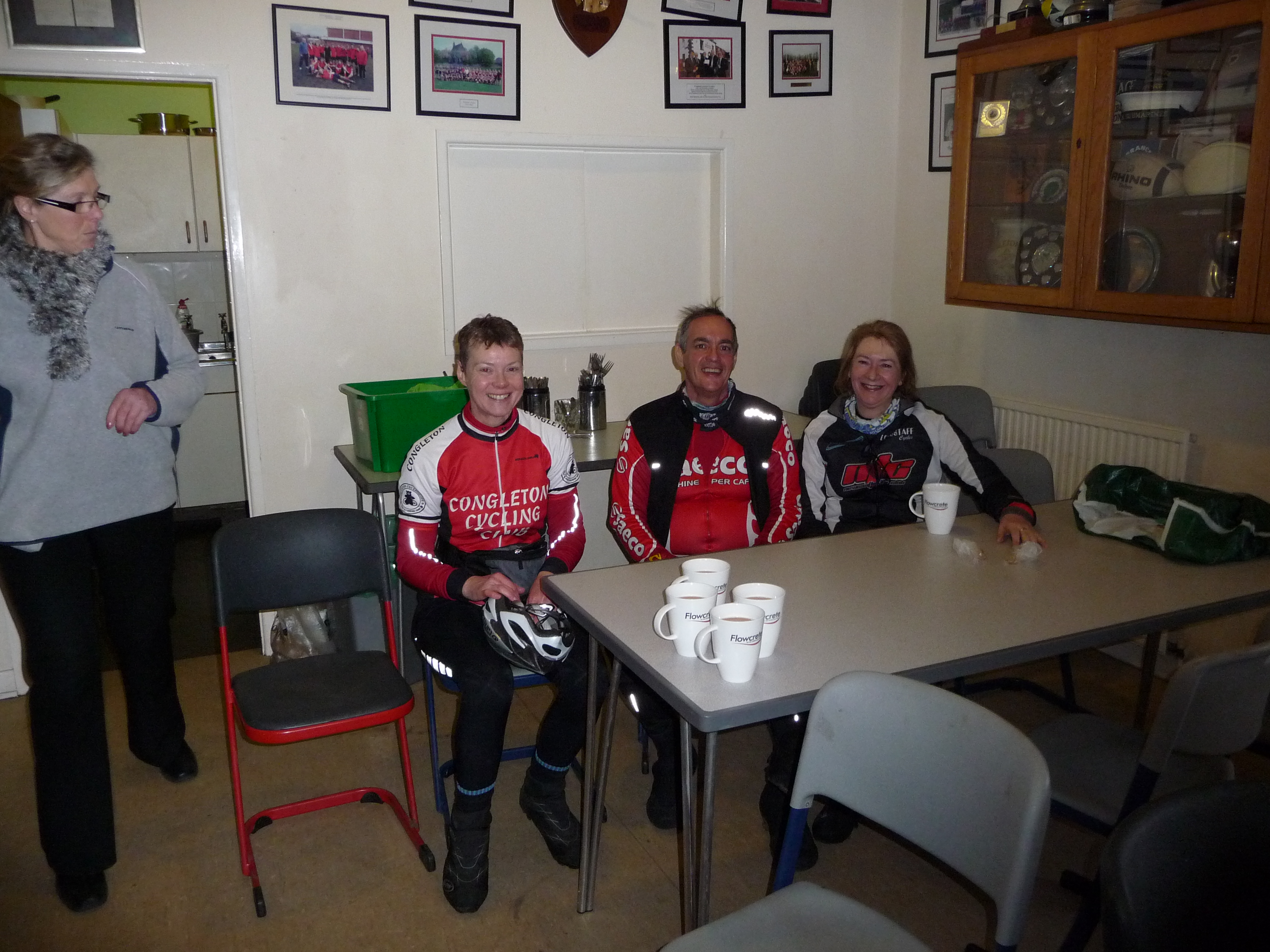 Our Racing Secretary and Event Organiser, Nick Decker was pleased that 17 riders braved the cold but dry and calm conditions and that 15 survived (Andy Malbon and Stephen Jackson classified as DNF), without incidents and returned to the Rugby Club in high spirits due to completing the 100 miles within the allotted time of 8.5 hours. Georgina & Bob Norton, Sue Blake, Richard & Tom Cowan, Mike Jones, Paul Kennington, Wayne Powell, Paul Turner, Ed Wright, plus five Guests, including Karen Dennet and four strong men from Leek C.C. rode via Betley, Madeley and Meir to the first “Tea Stop” at Eccleshall which was “manned” by Denise & David Hurst from their Camper Van. They continued through Hodnet and Wem to the obligatory lunch stop at the Raven Café, Press Heath and then continued via the narrow lanes to Chorley and Nantwich, where “The Hursts” hosted another Tea Stop, prior to the final leg via Church Minshull, Middlewich and Brereton Heath. At the Rugby Club, “The Hursts” again provided the warm drinks and buns and their efforts were greatly appreciated by all the riders. 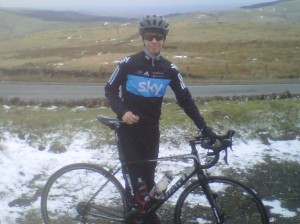 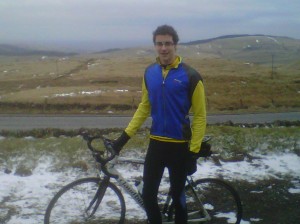 Only 2 riders formed the Club Run but Tristan Roberts and Sam French are a “bit special” in that they are both 15 years old. However, they rode up the Cat & Fiddle, stopped for a warm drink at the café and returned safely through the lanes.