– “Congleton Now” at the Town Hall
The club had a table at the “Congleton Now” exhibition in Congleton Town Hall which showcased the activities of voluntary groups in the town. Our display of photos, maps and leaflets, plus a classic Brian Rourke road bike, was staffed by Georgina and Bob Norton with assistance from Peter Hayhurst and Rob Waghorn. Club chairman Bob, said “There was a steady flow of visitors interested in cycling including Congleton MP, Fiona Bruce. She was very interested and posed for photographs with us. The opportunity for networking between voluntary organisations was also very useful and we are looking forward to next years event”. The Congleton Cycling Campaign, of which we are Members, also had a display. 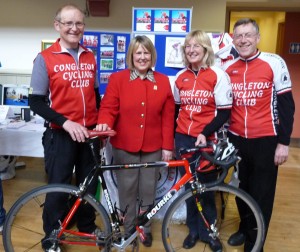 – MDTTA 10-mile TT on Twemlow – Chelford Course
In even better conditions, compared to two weeks ago, the winner’s time was only 4 seconds faster. Kelvin Milward posted 25.03; Duncan Poole did 27.17 – excellent performances in their first outings this year; Peter Hayhurst improved modestly to 30.33 and Peter Nelson was pleased with his 33.01 – in his first event this year. The winner was Richard Handley in 21.04.

– AUDAX Rides: Ironbridge 207K and Hawkstone 133K
Rob Waghorn organised these annual rides, supported by his wife, Avril and club-mate, Peter Nelson. The Ironbridge 207K had 25 riders, including Denise Hurst and Darren Nicholls. The first Control was at Market Drayton, the second (and lunch stop) was at Ironbridge, followed by a Tea-Stop at the Raven Café, Prees Heath. The Hawkestone 133K had 34 riders, including Georgina and Bob Norton, Stephen Kane and Doug Taylor and also had Controls at Market Drayton and then Prees. Both rides encountered a couple of heavy showers which may or may not have dampened some spirits but all returned within the time-limit; the last rider returning at about 7.15pm.

– Nelson Wheelers, Circuit o’t Dales, 51-mile Hilly TT
Five Club Members plucked up courage to tackle this tough, early-season, “Classic” from Ingleton, via Sedbergh, Hawes and Ribblehead to finish at White Scar Caves, above Ingleton.
The conditions (wet roads, light rain, bit windy) could have been worse but the atmosphere could not have been better!
Our Racing Secretary, Karl Austin had convinced our novice Time-Triallers – Mike Harrison, Stephen Jackson and Wayne Jackson to support him and our No. 1 rider, Alf Hilton – and they did not regret their decision due to winning the Team Prize, ahead of 13 sponsored clubs. Congleton C.C. is very proud to now be included in the event’s “Honour’s List”.
The event winner was none other than Andy Wilkinson (Port Sunlight) in 2.05.00; 2nd was Simon Bridge (Leigh Premier) in 2.10.39 followed by our Members: Alf Hilton, 3rd in 2.11.34, Mike Harrison, 11th in 2.19.31; Wayne Jackson, 27th in 2.27.59 (= Winning Team); supported by Karl Austin, 43rd in 2.34.21 (which would still have gained us 1st Team, had Wayne been DNF) and Stephen Jackson, 57th in 2.42.12. 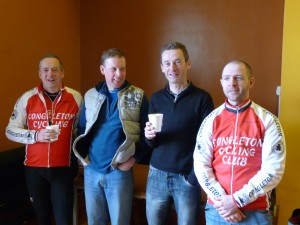 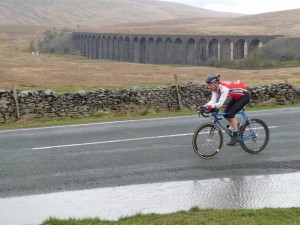 Future Fixtures
Committee Meeting on 7th April at 8 p.m. (prior to Club Night) – all Members are welcome.
Our newest website is in development and can be viewed on: www.congletoncyclingclub.org.uk.
The Club meets every Thursday at 8.30pm at the Rugby Club, Park Street and welcomes anyone who would like to swap ideas and stories on all cycling topics.