On Thursday Aug 30th the club promoted its second Come and Try It TT for novices at Brereton Heath Local Nature Reserve. This event was part of Team Congleton’s Olympic Celebrations with Gold, Silver and Bronze medals for under 15’s, under 18’s and seniors. Fourteen competitors raced around a 2.5 mile circuit in fine and bright conditions. This was a total contrast to the weather for event one back in June, when riders and marshals had to endure torrential rain. The club had a gazebo on the grass in front of the visitor centre which was used as a signing on and refreshment area. Afterwards Bob Norton presented medals to the first three in each age category.
U15 George Clowes (Kidsgrove Whs), Louis Cavill (Macclesfield Whs) and Maurice Bolton.
U18 Elliot Rice-Birchall (no silver or bronze qualifier)
Seniors. Paul Kennington (Congleton C.C.), Jack Ratcliffe (Congleton C.C.) and Noel Murphy. 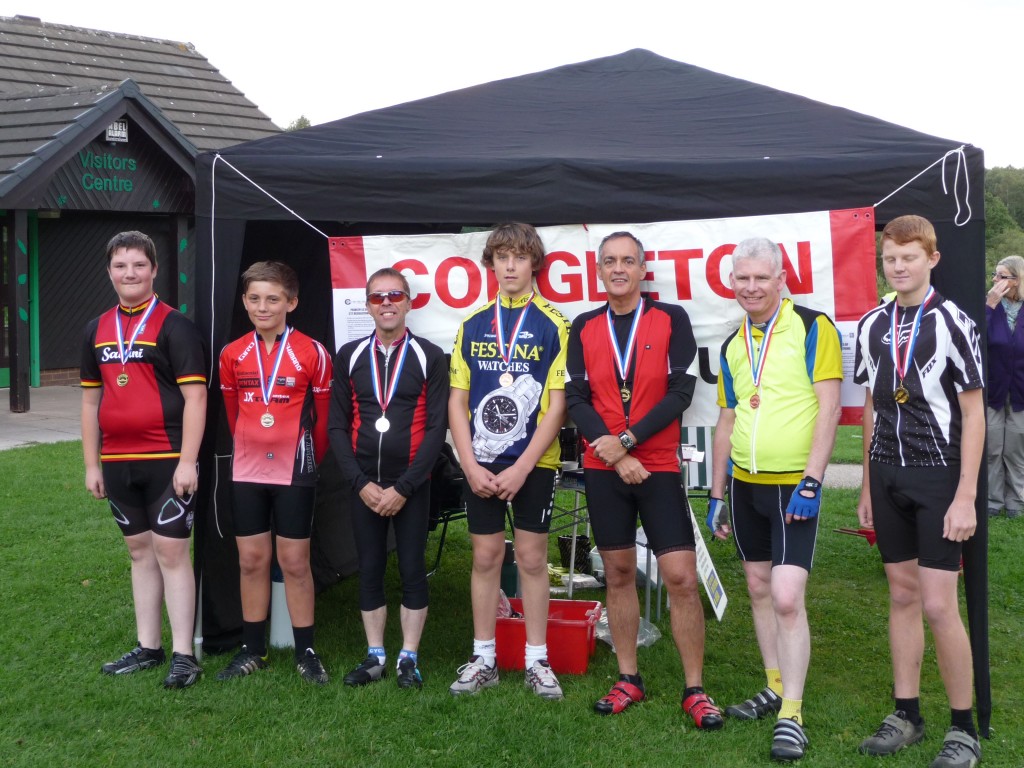 Roy Hayhurst, John Cotterell and Stephen Kane went to Northern Ireland between the 23rd and 28th August for a long weekend  tour organised on behalf of the Congleton Cycle Club. On arrival at Belfast, they cycled up the world famous Antrim Coast Road to Ballycastle. On the second day, ihey crossed the border and cycled to Ireland’s most northerly point at Malin Head, visiting the Giant’s Causeway on route. The views out to the Scottish Islands and the Mull of Kintyre were breathtaking and again they were blessed with stunning weather. The weather was all the better, when they heard it had been raining heavily back home in Cheshire. On the third day they cycled to Derry then on to Gortin, located in the Sperrin Mountains and then returned the following day to Belfast skirting Lough Neagh. In total they cycled 310 miles over the 5 days. Apart from some mechanical mishaps on the last day in Ireland (adding to the adventure), a highly enjoyable tour was had by all.

Steve Sladin rode this Charity Event which started in Barnoldswick and included timed climbs on Waddington Fell and Nick O’ Pendle climbs totalling 1940m of climbing through the Lancashire Fells. His ride time was 4hrs 40mins with beautiful scenery but some brutal climbs!!

Mike Harrison reports: “I won the bronze medal at St.Johann in Austria in the Masters World Road Race Championships. A group of five of us escaped halfway round the 2nd of 3 laps during the 75 mile race held in cool, dry conditions. We soon gained a minute on the main bunch and last time up the main climb I tried to hopefully whittle it down further but only managed to drop one rider. That left 4 of us going for 3 medals (Russian, Spaniard, German and me), the German rider jumped with 500 metres to go and unfortunately the rest of us hesitated and he was away for victory. The sprint for 2nd came down to a photo finish between myself and the Spaniard and he got the verdict. In the Stocksbridge RR at Penistone, the week before travelling to Austria, I claimed a 2nd place in the 3-man sprint at the top of the main climb after 100km.” 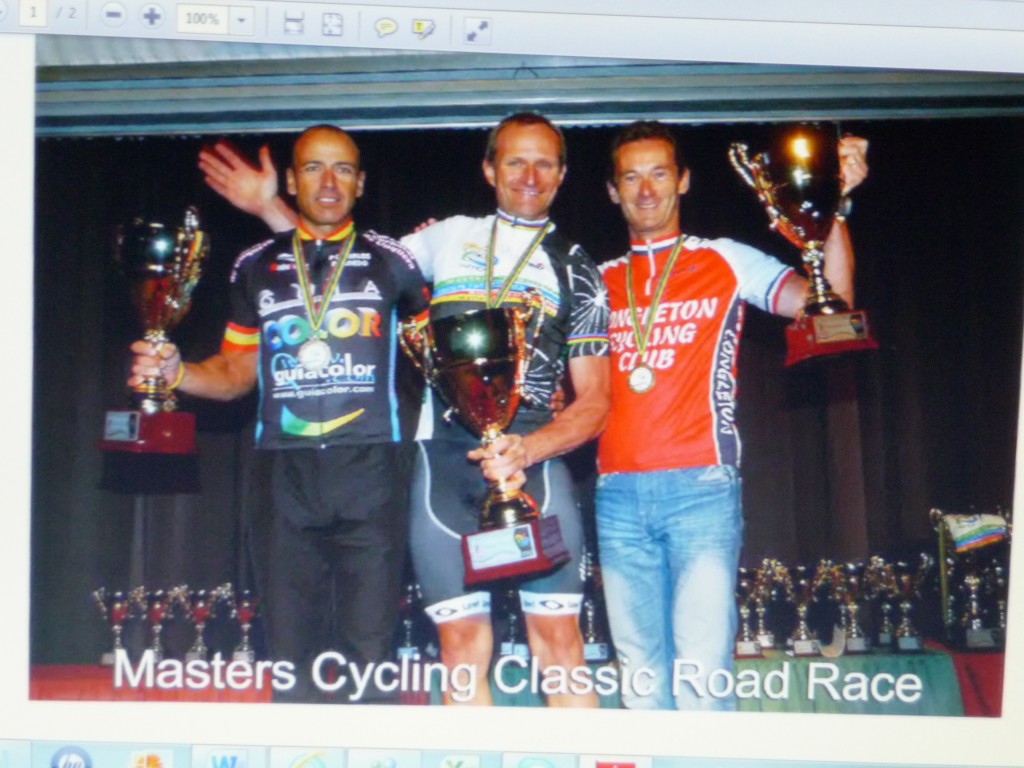 Three Members rode this event in Summer-like conditions. Kelvin Milward was pleased with his 1:02:58, Peter Nelson was disappointed with his 1:24:00 and Peter Hayhurst struggled to 1:27:04. The winner was Scott Burns, Manchester Wheelers, with 55:20.

Georgina Norton lead this ride and reports: “It was raining to begin with but it soon cleared. There were four of us – myself , Bev Hambleton , Les Hughes and a new Member, Ed Wright. We rode to the advertised cafe at Tattenhall. The outward route forced us up Radnor Bank, then along to Goostrey, Lach Denis, Davenham, through Vale Royal Abbey and Tarporley. The return route was Beeston Castle then Bunbury, Wettenhall and Church Minshull. Total mileage to and from Rugby Club was 65.” 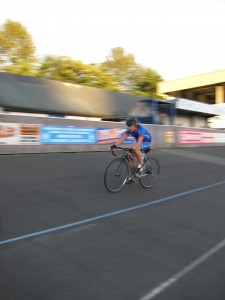 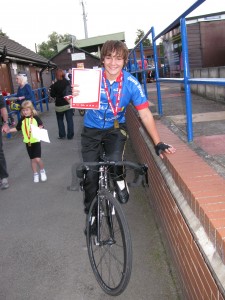 In excellent conditions, only two Members rode this event. Kelvin Milward improved his 2012 time to 1:02:10 but Peter Nelson was disappointed with his 1:26:17. The winner was Simon Bridge, Manchester Wheelers, with 52:54.

Laura Beattie, Sue Collins, John Broadbent, Tom Cowan, Dean Roberts and his 15-year-old son, Tristan and Stephen Kane rode the lanes to Audlem and return. The weather was sunny and warm with a slight headwind on the way out.

Spectating: Tour of Britain at Chelford plus Bridestones / Biddulph Moor

On Monday, Georgina & Bob Norton, Jean Lester & Les Lancaster, Peter Hayhurst and David McVitie (plus others??) were among the hundreds of spectators cheering the riders in the vicinity of Chelford. Although the riders had completed the major climbs and tricky descents between Ashbourne and Bosley, there was plenty of activity near Chelford, with the feeding station after Siddington, the intermediate sprint at the Egerton Arms and the good viewing point at Marthall. In addition to Bradley Wiggins and Mark Cavendish, there were many continental stars but they flashed by too quickly to recognise many.

On Thursday, the same selection of Members, plus Denise Hurst and Peter Hall, (and hundreds / thousands of other fans) chose the last of the main climbs – the Bridestones –  to cheer the riders, who were split into many small groups over 20 minutes apart. The weather was kind, so the views of the riders and their support vehicles could be traced from the top of Gun Hill, along Rudyard Lake and down into Rushton Spencer. It was easy to spot Cav and Wiggo as they formed a small group, 10 minutes behind the leaders. We considered ourselves very fortunate to have this prestigious race on our doorstep, twice! Pete Smith and Mike Line reported the best ride out to see the Tour. They rode to Trentham for the Start and then on to Oakamore for the first of the days KOM climbs, and then made it back to see the finish in Hanley. In the process they did 70 miles with 4700 feet of ascent. 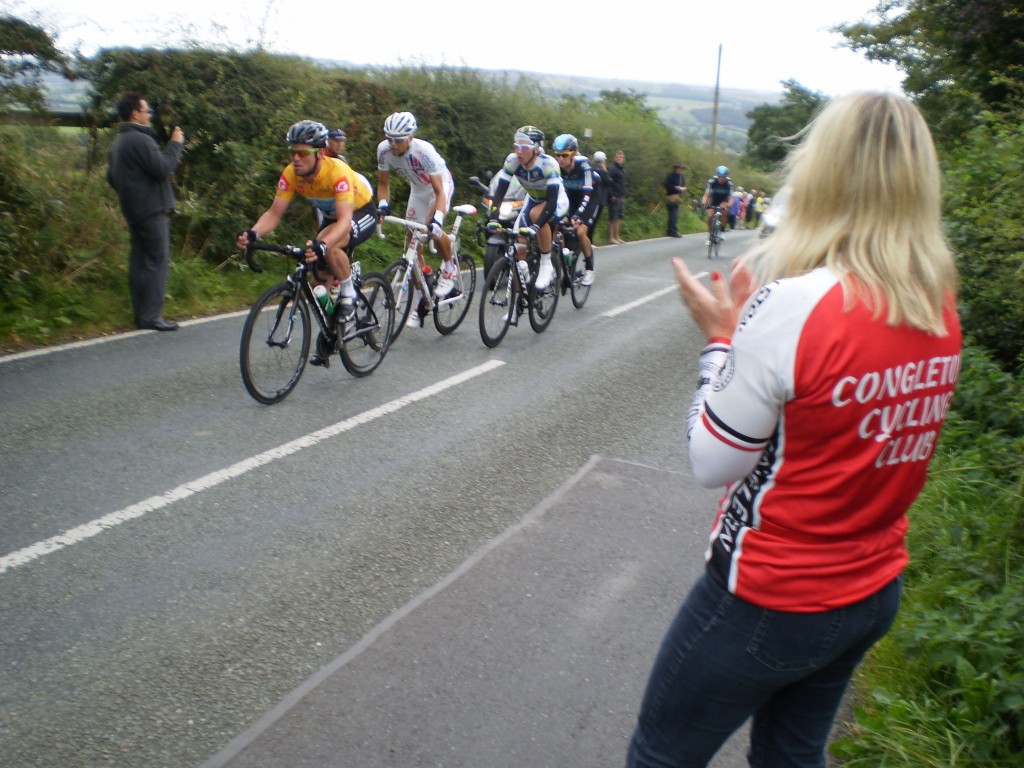 Social Ride to The Wizard at Alderley Edge – 30 miles

Clubrun to The Galley Café at Church Minshull – 62 miles

Six Members; Georgina and Bob Norton, John Broadbent (preparing for the Triathlon World Championships in New Zealand, where he will be competing in the 65-69 year category), Stephen Kane, Dean and Tristan Roberts took to the local lanes to Ackers Crossing and then to Rode Heath, Alsager, Audley and Madeley and then rode a clockwise loop via Hunterston and Nantwich for a well-earned meal at The Galley. The return route was via Winsford, Davenham, Lach Dennis and Goostrey, for a total of 62 miles, in overcast and windy conditions.