Calm, cool and overcast but never-the-less a very enjoyable solo effort via Biddulph Park, Lask Edge, Gratton, Longsdon, Cheddleton, Ipstones. I encountered the odd van / car on the narrow lanes between Lask Edge and Longsdon but the drivers were very courteous.

The enjoyment / satisfaction was due to various factors – such as: Having a “purpose” – in this case checking our son’s narrowboat on the Caldon Canal between Froghall and Consall Forge; being able to choose a quiet day (being retired); riding a nice bike with suitable gearing (e.g. 34 x 28 – absolute necessity for me); choosing a pleasant route with a combination of unfamiliar lanes; observing “nature” (seeing and hearing animals and birds); enjoying the scenery – even in a grey background; making efforts on the ascents in order to improve “fitness” and descending safely on dodgy surfaces.

We all know Biddulph Park (much nicer than Woodhouse Lane – agh!) and Lask Edge but the lanes around Gratton and Dunwood were new to me. After Longsdon, the triple crossing (River Churnet / Caldon Canal / Dismantled Railway) was familiar, as was the tough climb over to Cheddleton. The trains were running again on the Churnet Valley Railway, which would have been an easy way to travel to Froghall. Even the canal towpath would have been flat but still very muddy in places (experienced on earlier visits) but would have enabled me to enjoy a pint and a Cumberland sausage bap with chips and all the trimmings at the rustic and welcoming Black Lion at Consall – but today I had more hills to climb! The stretch to Ipstones includes three steep climbs but the valley scenes and woods compensated somewhat. The descent to Froghall was tainted with the knowledge that I would soon need to climb back up! I took the necessary care on the steep, bendy bit near the bottom as the surface was damp. Then I had a leisurely ten minute ride along the towpath to the boat; a quick check that everything was OK and returned to Froghall to start the return leg up to Ipstones, then the next 3 miles of the outwood leg before turning right along more “undulating” terrain to join the Leek – Ashbourne road near Bradnop. The rest was main road stuff due to shopping in Leek – resisting the temptation of tea and cakes at the Health Food Shop (and a beer at Den Engel opposite) – and then Rudyard and The Bridestones (legs really hurting now) but the descent to Home and the views over Cheshire was still an enjoyment and satisfaction of getting 36 tough miles in my legs. 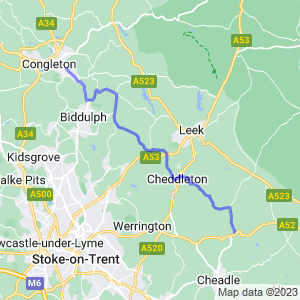