Cycling Chicks were on a challenge to Catch 22

Denise Hurst, Mary Renshaw, Peter Hayhurst and Peter Nelson were amongst the seven delegates from the VTTA Manchester & North West Group who attended this presentation of the year-long study and recommendations of the Standards (Handicap System) Review by the Working Party. We felt it was not only worthwhile from the information point of view but also as a gesture of support and acknowledgement of the expertise and work involved. The tea-breaks enabled us to socialise with people whom we rarely meet and the homeward journey was interrupted by a very enjoyable meal.

Our Vice Presidents, Kath Biddulph and Roger Little, plus Members – Denise and David Hurst, Mary Renshaw, Peter Hayhurst and Peter Nelson attended the annual Lunch and Prize Presentation in Middlewich. As usual, the Christmas Spirit was in full flow with seasonal decorations and of course the seasonal food which was excellent and plentiful. The various speeches were not only interesting but also humourous and it was a priviledge to see and hear the Guests of Honour, Ruth and Bob Williams (of Cheshire 12-Hour fame) and also the “Welcome” by Chris Ashworth and the “Response” from Dave Fearon. Our Club had only one prize-winner this year. Peter Hayhurst collected his certificates for the Group 3- and 4-Distance BAR (Best All-Rounder) Competition, achieving 4th place in each.

“Roy Hayhurst, Stephen Kane, Bob Banner and Bill Boynton set off in a watery sun for what should have been a trip to Delamere Forest. However there was rebellion in the camps and we changed to a non specific venue in the direction of Beeston Castle. The strong headwind and lack of Club runs forced an early dismissal and changed the quartet to a triumvirate at Warmingham. Ranks were further reduced when Roy Hayhurst left early for lunch, only after he had decided that he would try and break the other two by forcing a time trial pace into the aforementioned headwind.

Unbroken, the dynamic duo that was left carried on their non specific route to a caff around the Castle. Armed with a Garmin we sought out unexplored routes in the labyrinth of lanes that make Cheshire so fun to cycle around.

We eventually decided to be specific and settled on a cafe at Tiverton. Unfortunately, post lunch, the day got less sunny and distinctly more watery, though at least we could now speak to each other above the sound of the wind. Still in a non-conformist mood, we ended up going through Crewe Town Centre on the way home in pursuit of carving out new routes. 64 miles after setting off from the Congleton Rugby Club we arrived back in town, a bit bedraggled, but happy that we decided to give the alternative of Christmas shopping with our families a miss. What is the internet for after all!

If this sounds like more fun than traipsing around the Trafford Centre and you would like to join the Congleton Cycle Club, then please come along for a cup of tea and a chat at the Congleton Rugby Club on a Thursday night.  We meet from 8:30pm to 10.30pm.”

Stephen Kane and Bob Norton were the “club run”. They did the advertised ride to Dagfields via Alsager, Audley and Madely, returning via Wybunbury, Wrinehill, Betley, Haslington, Sandbach Flashes, Middlewich and Brereton Heath. Very wet on way home. About 60 miles. 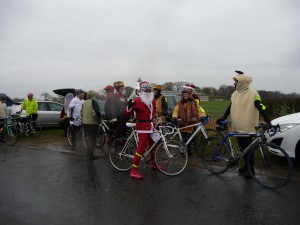 This annual event is 50% Fancy Dress and 50% Racing. After a sunny Saturday, Sunday dawned grey and wet but fortunately not freezing so this did not deter many entrants. Club Members, who rode the Fancy Dress event, supported by Dave Hurst and Peter Nelson, were two of the twelve Chelford Chicks, Denise Hurst and Mary Renshaw and Peter Hayhurst was a lone “Catch 22” Father Christmas. The Chicks won the best fancy dress team prize.  “Catch 22” was the fastest of the solo riders, putting 5 seconds into David Joynson (Kidsgrove Wheelers) and 30 seconds into Nige Wood (Wills Wheels)!  Ironically, in this moment of glory, there was no prize for fastest rider in the Fancy Dress race – so clearly nobody could catch 22, which has got to be worth more than just a few quid.

The Organiser, Dave Fearon (Weaver Valley C.C.) reports: “ Despite the wet and windy conditions the M&DTTA Christmas 10 mile time trial went well with only 17 none starters out of a field of 114 riders and no DNF’s.  The solo fancy dress event was well supported and enjoyed by the many spectators.  Best fancy dress was “The Star” (Ian Fielding – Stretford Wheelers and best fancy dress tandem was “Mary & Donkey” (Sarah & John Swinnerton – Kidsgrove Wheelers).  The costumes were great and the Chelford Chicks (Manchester Ladies in disguise) were the only riders who kept warm in their feathery outfits.  Paddy the Billevette (Pat Healey – Team Spirit) was dressed in full cheerleader outfit and disturbingly raised quite a few eyebrows dressed as a woman! The serious tandem event  (if you can call racing in cold rain in December serious), was won by Richard Cording & Andrew Dearing of Matlock CC with 22:34.  In second place were David Homer & Colin Williamson of Solihull CC with 24:43. Eight tandems started and finished the event which would be a good field in a Summer tandem event on a fast course, so thanks to them for making a race of it. The solo event was won by local rider Steve Burke of Macclesfield Whls with an impressive 22:54 on this sporting course.  Steve narrowly  beat Ian Cooke of Team Swift who recorded 22:59 and in third place was popular coach and local ace, John Morgan of Preston Wheelers with 23:25.  Steve Burke also retained the Jim Broome trophy as best M&DTTA rider. The fastest lady was Anne Staley (Plan B Racing) with 30:54, narrowly beating Angela Barratt (Kidsgrove Wheelers) who recorded 31:08.” 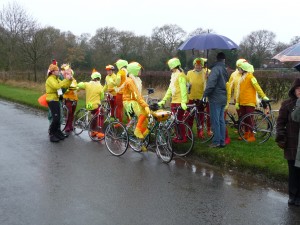 Club Members on bikes, in club colours, lead the funeral cortege to Macclesfield Crematorium: Georgina and Bob Norton, Denise and David Hurst, Bill Boynton, Jim Cook, Peter Hayhurst and  Doug Taylor. They were joined by Jean Lester, Les Lancaster and Peter Nelson. Pam Dean and her daughter, Kate, invited all attendees to a gathering at Wellspring Methodist Church Hall where we offered our condolences and reminisced about John’s lovely character and his valued contribution to the life of our Club.