One of the classic trips by bike in France is from the English Channel to the Mediterranean, the Manche to Med. Club Chairman Bob Norton and wife Georgina have recently  from completing this trip. Starting from Caen port, (Ouistreham), on the Channel coast they rode to the Med at Cannes on the Côte d Azure in 15 days. The trip was over a distance of about 830 miles, passing through some of France’s finest countryside. 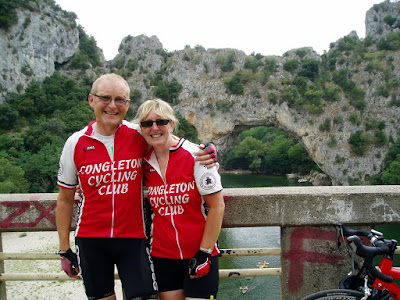 Bob & Georgina Norton on their Manche to Med Tour

Starting with the rolling green countryside of Normandy, with its Châteaux and historic war sites the route took them through thirteen French Departments. Crossing the Loire at Blois, they then rode through the forested areas of the Cher into hillier terrain, climbing into the Massif Central to pass though the Parc Regionale de Volcans. The trip visited the Puy de Dôme which at 1465 metres is the highest of the extinct volcanoes in the region. The road up it is unfortunately closed to traffic until 2012.

The Puy de Dôme was the scene of one of the most epic showdowns in Tour de France history in 1964. This being the last major climb in the Tour, with Jaques Anquetil holding roughly a minute advantage over the “eternal second” Raymond Poulidor, Anquetil bluffed Poulidor and rode side by side with Anquetil matching the better climber, Poulidor, with each turn of the pedal. Anquetil finally cracked and Poulidor beat him by roughly 40 seconds on the day. The only decisive stage left in the race was a time trial which Anquetil easily won and stretched his lead over Poulidor by 55 seconds, and went on to win in Paris.

The Ardèche Gorge was just one of three spectacular gorges on the trip, the others being the Gorge du Nesque in the Vaucluse and The Gorge du Verdon in the Var

The couple stayed mainly in Logis de France family run Hotels known for fine cuisine, so the day’s efforts were made worthwhile each evening with   3 course dinners and good wine.

The second week in particular was quite strenuous, as not only did the tour pass through mountainous area of the Central Massif, but also through the Rhône and Provence Alpes.  The opportunity to scale another Tour de France monument the Mont Ventoux presented itself, but was spurned on this occasion. None the less Bob altimeter still logged an impressive 15000 metres of vertical ascent for the trip.

The Côte d’Azure was reached at Cannes after 15 days in weather that would be hard to repeat. Rain jackets were only worn for one hour on the entire trip, despite TV pictures showing tourists being rescued from flooded areas of the Ardèche and Rhone Valley only a day after Bob and Georgina passed through.

As well as being a great tour, Bob will be leading a group holiday over the route in September 2011 for CTC Cycling Holidays. For further details see www.cyclingholidays.org