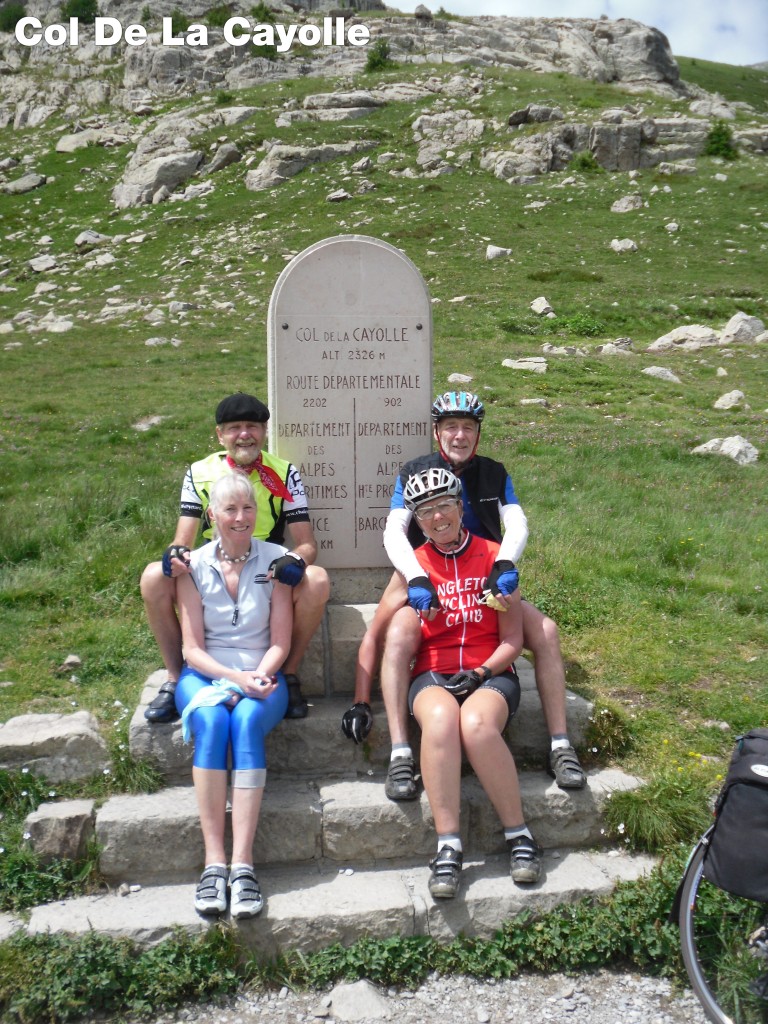 Denise and Dave Hurst (on right), with friends Carol and John Pardoe at the summit of Col de la Cayolle.

Two Members of Congleton Cycling Club, Denise and Dave Hurst, plus two friends set off with bikes and luggage from Macclesfield by train to Dover and boarded the ferry to Calais. Here is their report:

“On arrival in Calais, we jumped on the bikes and with luggage firmly fixed on the rear panniers, started an eleven day journey to Orange, staying in B&B’s and small hotels. From Calais we travelled via Arras, Soissons, Vitry-le-François, Montbard, Tournus, Bligny-sur-Ouche, Lyon, Vaison-la-Romaine to Orange. By cycling mostly on “B-Roads”, old “A-Roads” and lanes, we passed through many interesting towns and villages, where we were always made welcome by the locals. Near Orange, we joined up with sixteen other cyclists on a pre-arranged CTC tour where we toured through Provence and the Southern Alps. We were blessed with fantastic weather, only having rain on approx. 1½ days; the rest of the time was clear and sunny, often 30ºC plus. This made riding through Provence especially delightful as all the lavender and sunflowers were in full bloom.”

“Once again, on this Tour, still carrying our own luggage, we stayed in small provincial hotels, often two or more nights in some locations. Travelling to Buis-les-Baronnies, Sisteron, Turriers, Barcelonette, Guillaumes, Castellane, Oraison to Aurel. During the tour, we passed through many of the legendary gorges such as Gorges du Cians, and Daluis, via the Fortress of Entrevaux and the Grand Canyon du Verdon and many more. These locations not only have great scenic interest but are also rich in history and geology. But as we all know; going down also means going up – a bit contradictory but nevertheless, a fact. We thereby ended up climbing many Cols such as: Col des Sagnes, the Col d’Allos and the testing but rewarding Col de la Cayolle, and many more – all with fantastic panoramas and well worth the effort.”

“On some of the free days, Dave and Denise took time out to cycle some of the most infamous mountain climbs in the area, such as, Mont Columbis near Turriers, plus the famous Cime de la Bonnette and the mighty Mont Ventoux which we first climbed in 2010 with Mary Renshaw of CCC and other friends. We spent our last night in Aurel with our CTC touring friends, with a great meal, plenty of wine and good humour. The following morning we departed Aurel and cycled to Nimes airport, found an overnight stop near to. Next morning, we packed our bikes in special polythene bags and flew back to Liverpool and home.
Our comments: Great Holiday / Great Cycling / Great People – “The French” – who were after all our hosts / Great Weather / Great Food and Wine. Cycling Statistics: Approx. 1380 miles; approx. 20,690 metres climbed on marked Cols and mountains.”

“Our Advice: Get on yer bike and ride. A cycling holiday will be one you will enjoy – and remember more than most – and you can tailor and adapt to suit yourselves, before and during your time away. We found the D.I.Y approach good fun and good value. Go on the net, book some B&B’s and arm yourselves with good maps, a GPS, a phone and off you go. Don’t travel too many miles / km’s each day between stay-overs; give yourselves time to relax and chill-out. Get to know and enjoy the country you’re travelling in, and of course the people. Plus, don’t forget you make all the decisions of when and where to go.
Happy cycling, anywhere, anytime!”

25th September – World Duathlon Championships at Gijon, Spain
Bill Boynton competed for GB in the World Duathlon Championships at Gijon, Spain where 700 competitors from over 100 countries went to the start line. As the British 65-69 Age Group champion, he had high hopes this year. Unfortunately, his preparation was badly disrupted; unable to run for 4 months by an Achilles injury and with only 4 weeks full training under the belt, he decided to compete. He reported:
“I ran a strong opening 10.5 km in 43:09 but the lack of race fitness showed as early as the first of the two 20 km bike laps over a hilly course when severe cramp held him back for the rest of the race. To make matters worse, he and some other competitors were misdirected by a marshal and 3 minutes were lost so he clocked 1h 14 min, well below his best. In the final 5.2 km run it was a case of hanging on in 23:30 for an overall time of 2:26:30 which placed him 5th of 20 entries in 65-69 age category. Reflecting on the experience afterwards, Boynton commented “It was a great experience to take part in my first World Championship and in the circumstances, I am very pleased with the result, as excluding the misrouting, I was close to my PB and would have finished 4th. There is always 2012 to look forward to but I will be in the last year of my age group, with strong younger competitors moving up. At World level, extra years are a big penalty. Maybe in 2013 then! “

“Rourkies” Charity Cat&Fiddle Challenge – 55 miles
Following the Hill Climb, five riders joined this ride at Astbury, handed in their donations at the Burslem HQ and returned to Astbury in 3 hrs 30 mins, excluding the stop at HQ, for the three fast men (Stephen Jackson and son, Pierre and Bill Boynton) and 3hrs 40 mins for the two slower riders (Peter Hayhurst, Wayne Powell).
The breeze was generally assisting on the Cat & Fiddle climb but changed to a trouble-some headwind on Axe Edge on onwards to Royal Cottage

Clubrun to Priest House, Audlem – 52 miles
Following the Hill Climb, eight Members continued on the delayed Clubrun via Oakhanger lane and the roads through Betley and Checkley to this ever-popular venue. Denise and Dave Hurst, Georgina and Bob Norton, Dave McVitie, Peter Nelson, Doug Taylor and Rob Waghorn enjoyed all aspects of social cycling in pleasant but easy country lanes. They even made it home, via Wybunbury, Crewe Green, Haslington and Hassall Green, before the rain started.

Our new website:
www.congletoncyclingclub.org.uk.
The Club meets every Thursday at 8.30pm at the Rugby Club, Park Street and welcomes anyone who would like to swap ideas and stories on all cycling topics.