The time trial season is drawing to a close, but not before Kelvin Millward  posted  the fastest 50 mile time achieved by a club member in 2013. He rode in the recent (Sept 28th) Manchester Wheelers  50 on the Uttoxeter  based course.  Kelvin  said “On the day the weather was fine and dry, with a slight chill but for the time of year excellent, albeit with a strong wind. This was however in the best direction for this course being a tailwind back from the final turn, allowing some respite heading out thanks to the Rocester leg. I was aiming for a sub 2 hour ride was pleasantly surprised to finish in 1:56:50.

The hill climb season is now building towards its national championship at the end of October. This season we have several riders participating in this strenuous branch of the sport. Ben Norbury competed in the Leek CC Hill Climb Championship on Gun Hill, Sunday 6th October. Gun Hill near Leek has featured many times in the Tour of Britian and is infamous for bringing a young Mark Cavendish to tears. It was the perfect morning for a hill climb, dry, zero wind, unseasonably warm and with a stunning view rewarding competitors at the top. Ben came in 2nd place with a time of 6:11. 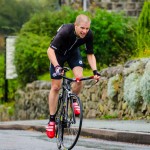 Ben reports that the competitors taking part in the Lyme RC Mow Cop Hill Climb on 13th October were met with a cold and wet morning to attempt the notoriously difficult Station Road J9/14 course. The course is a tough 1400 metres with an average grade of 11.1% reaching 25% at its steepest. All riders were met with cheers of encouragement by enthusiastic supporters and fellow competitors at the course’s steepest section, the 1 in 4 “wall” at the top. Congleton Cycling Club had 4 riders competing in a field of 54. Nick Decker made the prizes coming in a fantastic 5th place, with a time of 4:54.5. Our other rider results were, Ben Norbury 5:39.4, Pete Tatton 6:09.9 and Mike Jones 6:12.4. Congratulations to all for their very respectable times contributing to an excellent 3rd place in the fastest team competition. Tejvan  Pettinger won the event with an incredible time of 4:22 beating the course record set last year by this year’s 2nd placed Matt Clinton.

Club Coach Charlie Evans has had an interesting assignment over the summer. Charlie is the Senior Coaching and Education Officer at British Cycling and he has been involved in training Barney Harwood,  the  BBC Blue Peter presenter to ride in competition with the Tour of Britain riders on the stage which finished in Kendal last month. Barney was to ride directly from the start in Carlisle , a distance of 55 miles, whilst the professionals pedalled 140 miles. The story of this effort was filmed for Blue Peter and is being shown on Thursdays between Oct 3rd and 24th. Charlie is a star of the show. To find out what happens watch Blue Peter or catch up on BBC I Player. 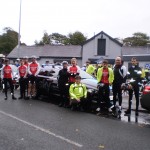 Club runs do not stop for the winter. On the weekend of Oct 5/6 the Saturday ride went to the Wizard Tea Room on Alderley edge, via Newsbank, Lower Withington, Bate Mill, Marthall, and Nether Alderley, returning through Broken Cross, and Gawsworth. Three new riders were welcomed. Jonathan and Sharon May and Kevin Talbot joined regulars bob Banner (leader), Georgina and Bob Norton, Bev Hambleton, Peter Nelson

Sundays ride had twelve participants. Denise Hurst led the group on 60 mile round trip with a cafe stop at Red House Farm in Dunham Massey. The riders involved included Jonathan and Sharon May,Bob and Georgina Norton, Tristan Roberts, Jim Cook, Stephen Kane, Mike Line, Roy Hayhurst, Wayne Powell and John Broadbent.  The route out went via Goostrey, Plumley, Great Budworth  High Legh and Little Bollington, returning through Tatton Park and Knutsford. At Great Budworth , the group stopped briefly to watch a road race organised by the Weaver Valley Cycling Club and on the way back some riders diverted to Allostock where the Johnny Helms Memorial invitation time trial was taking place. This is a team event, where a “cycling celebrity” is paced by a faster rider. The field was peppered with great riders from the past, and was an opportunity for nostalgia.

The Sunday club run for Oct 13th was a wet one, and due to club riders doing other rides, there were only two on it. Sue Blake, who was returning from injury and Georgina Norton, enjoyed an elongated stay in Radway Green garden centre, before returning to Congleton.

Peter Hayhurst, the clubs press secretary, is unable to write the club reports at the moment. He has suffered a stroke and is currently recovering in hospital. We all wish Peter a speedy recovery. In the meantime Bob Norton club chairman is appealing for a stand in to take on the reporting role.