This section normally appears at the end of the report but the following events now need to be highlighted, especially our 2nd “Come-And-Try-It Time Trial”, as the first one, in June, was a success but due to the very bad weather, there were only 3 riders. We hope that these 3 plus many more will participate – see details below.

Meet at Unicorn P.H., Holmes Chapel Road, West Heath at 10 a.m. 15 mile ride to café and 15 mile return – at pace of slowest rider – and not only for Club Members.

Distance – 2.5 miles. Meet at 6.30 p.m. – Brereton Country Park Visitor Centre. This is for all cyclists – of 12 years and over – and especially novices. Riders will start at one minute intervals and the course around Brereton Heath, Somerford and A54, will be well signed and well marshalled. The Awards will include many Age Categories.

Jamie Willets reports: “A nice ride, out and about around the Black mountains and the edge of the Brecon Beacons, entailing 78km of riding and approximately 6000ft of climbing. With a massed start with about 600 riders, I took it easy and didn’t run off with the leaders but sat comfortably in the top third so not to get held up on the first off-road sections. The course
had about 8km of riding on the roads before hitting the trails which gave plenty of time for things to spread out. The first 30km were great with bright sunshine and masses of single and double track riding. After the second feed station, the 2 shorter rides peeled off left, and another short road section led to the biggest climb of the day. At around 1900ft of climbing and taking 45mins to climb we were rewarded with a cracking descent. Sadly the weather turned nasty soon after this. I was glad I packed my waterproof as a torrential rain storm came through. A lot of the track became so churned and ended up having to be walked. Once we got riding again the mud was a classic grinding paste and on the final few descents life became sketchy with minimal brakes. I was happy to finish the ride comfortably in under 6 hours with plenty left in my legs.”

The warm evening attracted 28 riders so some fast times were recorded. Winner was Jack Green (VC St Raphael) with 21:10; second was Nige Wood (Wills Wheels) on his trademark fixed gear with 21:31; third and fastest of the Congleton riders was Steve Hulme with 22:16.

Denise Hurst was our sole representative in this qualifying event for the MDTTA  Best All-Rounder competition. After a morning soaking, the sun returned but the wind force increased – and a hard day was made even worse, as with only half an hour left, she had an accident which necessitated an ambulance ride to hospital and a patch-up job. Typically, she was concerned about being credited with a “distance” and was some-what relieved to learn that she had completed 187 miles. Get Well Soon Denise! (see Photo by Simon Evans) 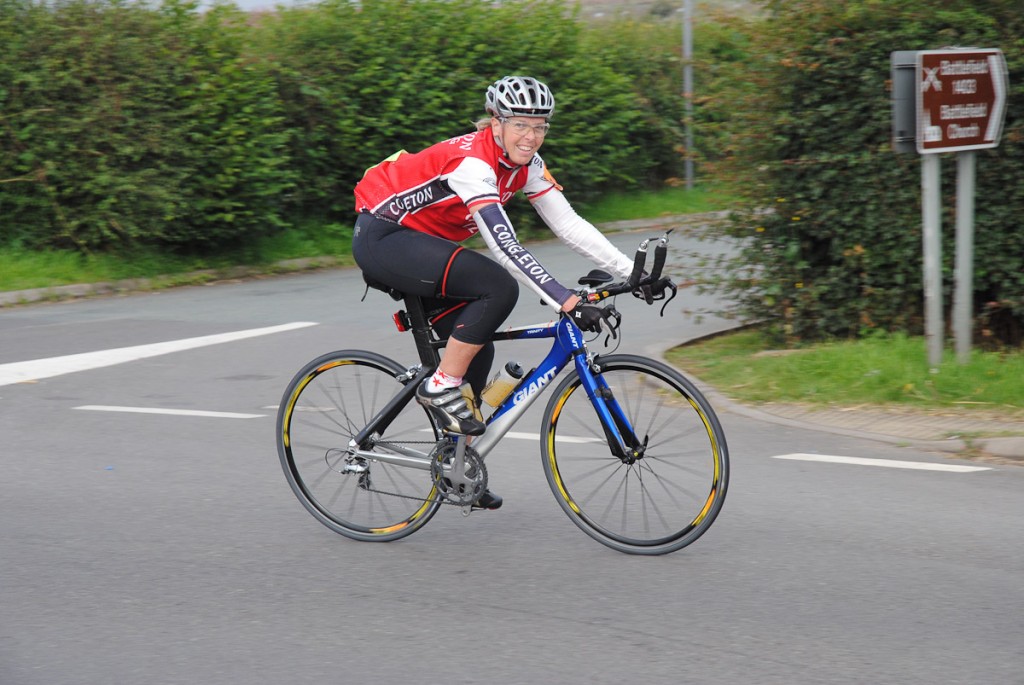 Georgina Norton, Peter Nelson and Doug Taylor formed the B run and the faster riders, Sue Collins, Richard and Tom Cowan, Steve Kirkham and Pete Smith, formed the A run, so as to ride at 2 speeds but all met at the Station café. It worked well and everyone was happy! After lunch the 2 groups set off separately. The B group came back through the lanes and had a second stop at Minshuls Garden Centre, finishing with 68 miles. The A group did more main road and were faster but did 5 miles less – so honours even.

Another fine warm evening for the last time trial of the year attracted 28 riders including 6 newcomers riding their first race (no doubt inspired by the Olympics!). Clear winner was James Tucker (Pennine RC) with a stunning time of 20:58 for this course; second was Steve Hulme with 22:51.

Bob Norton reports: “There were 8 of us. Myself and Georgina Norton, Mary Renshaw, Doug Taylor, Sue Collins and 3 prospective new members: Tom Cowan, Steve Kirkham (was a member back in the 90’s) and Steve Smith. We went out via Malkins Bank, Crewe (Leighton) Nantwich. We then got a bit lost in the lanes, and eventually got to Bunbury having done 42 miles from Congleton. It rained just as we got there and luckily, had stopped before we left. The return was by popular request, more direct. Leaving Bunbury we went through Tilstone Bank and headed for Wettenhall and Church Minshull, then Cledford Bridge, through to Brereton Heath and back to Congleton for a round trip of 65 miles.”

The Club meets every Thursday at 8.30pm at the Rugby Club, Park Street, except for the first Thursday of the month where the venue is Beartown Tap. Anyone who would like to swap ideas and stories on all cycling topics is welcome to attend.